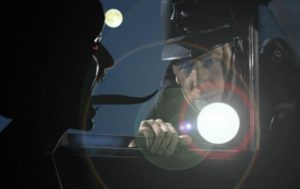 Tom Slemen changed a few names in this weird story for legal reasons.

In the summer of 1973, police were on the lookout for a menacing prowler dressed in black from head to toe who began to frequent a secluded lovers’ lane in Wirral.

The prowling ground was mostly the two-mile-long Thornton Common Road in Raby Mere, and the lurking voyeur was said by a few witnesses to have a large knife in a home-made sheath attached to a belt.

He was described as well over six feet in height, athletically built and had blackened his face – possibly with burnt cork.

PC Frank Carter was sceptical about the existence of the prowling bogeyman. He was 42 and knew, from many years of personal experience, how fear was a great magnifying glass which enlarged the physical size of miscreants and it was also an inventor which added details to perpetrators which rarely tallied with those of the malefactors when they were caught.

PC John Upton – just turned 21 – believed the prowler was real and likely to use that big knife he was said to carry.

John always had his nose in the ‘Penguin Dictionary of Psychology’ and was forever dipping into his well-thumbed copy of ‘Moriarty’s Police Law’, and Frank was always telling his young colleague how book-learning rarely applied to the nitty-gritty world of real crime.

“If he’s got a knife, he obviously intends to use it,” PC Upton argued, sitting with his colleague in the Panda car in the still, moonlit night.

“This fellah has only been seen during the hours of darkness, mate,” said PC Carter, unscrewing the Thermos flask full of sugared black coffee “and yet we had one witness who said he had fair eyelashes!”

“I think our prowler is an outsider”, opined Upton, gazing up at the full moon hanging over Thornton Common Road.

“I feel he’s a military man – the commandos used to blacken their face with burnt cork in the war to blend in with the night.

“He’s probably a loner who, for some reason, has not been able to form a relationship with a woman, hence he goes around at night watching couples in lover’s lanes, and he craves what they have.”

“Crumpet, you mean?” PC Carter poured a cup of coffee into the Thermos’ plastic cup.

PC Carter narrowed his eyes and looked through the windshield of the Panda; someone was coming down the narrow lane.

PC Upton went to switch on the Panda’s headlights but Carter told him not to.

“Not yet, lad – let him get a little bit closer; he might be our prowler,” he whispered to Upton.

When the figure was 30 yards away, the policemen could see it was a grey-haired man they both knew – a Bromborough shopkeeper in his fifties named Brian Moss.

The headlights went on and the constables left their vehicle to see what the matter was.

“There – there’s a – a thing in my car!” Brian gasped, and he almost fell onto the bonnet of the Panda, panting and fighting to regain his breath.

“A what in your car, sir?” PC Upton queried, and the shopkeeper gulped down the night air and looked back down the road with a frightened expression as he explained: “I picked a woman up about a mile down the road, and – well, she just changed into this thing – it was like a nightmare! Her tongue – ”

“Have some coffee Mr Moss”, said PC Upton, going to fetch the Thermos from the car.

The shopkeeper admitted to picking up a woman of the night in his car, but as they kissed in the car, she changed into something ghastly – something that was not human.

“You haven’t been taking drugs have you?” PC Carter asked the merchant, and Moss shook his head and urged him to go and see for himself, so a bemused Carter went and got his torch from the Panda.

He walked down the moonlit road till he came upon Moss’s car.

There was a silhouette in the front passenger seat. PC Carter saw the front side window was down and he leaned in and shone the torch in the woman’s face.

She was about 30 with a bob of red hair – and blood-red eyes.

She hissed like a cat at the torch, her mouth opened exceedingly wide, and an abnormally long tongue shot out and made a rattling sound like a snake.

PC Carter swore and backed away, and the woman – or whatever she was – lunged at him.

Her head came through the window on an impossibly long neck, and she uttered the very swear words Carter had shouted in parrot fashion.

The policeman unashamedly ran up the road, and he told Upton there was indeed something “horrible” in the car.

Upton turned on the Panda’s headlights and all three men saw something black leave Moss’s vehicle and slither off into the night.

“Don’t mention this at the station or we’ll be committed,” Carter told Upton, who kept saying, “What was it?”

“I don’t want to know, let’s get out of here,” said Carter, starting up the Panda, and Moss said, ‘What about me?”

“You get back in your car and go home to your wife, mate!” Carter told him.

Minutes later the Panda almost ran down the local doctor, Mr Owen, out making an emergency house call to a seriously ill farmer in the area, and after apologising to the physician, Carter said to Upton: “Did you see his face? He forgot to rub the blacking off.”

“When he looks in the mirror later he’ll realise how near he came to being nicked and we’ll hear no more from our prowler,” said Carter – and he was right.

The prowler retired after that eventful night.