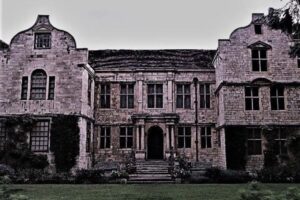 At the time, Harry entered the dark and rather gloomy cellar, and found a nice level excavated trench in which to set the feet of his ladder, to provide a solid platform from which to work. He placed his light on the ground, and climbed the ladder in order to reach the ceiling above, and started on his work.

After a short while he heard an odd sound pass through the cellar. Harry at first took this to be music being played by the workers upstairs, but as the music grew louder he began to have his doubts. 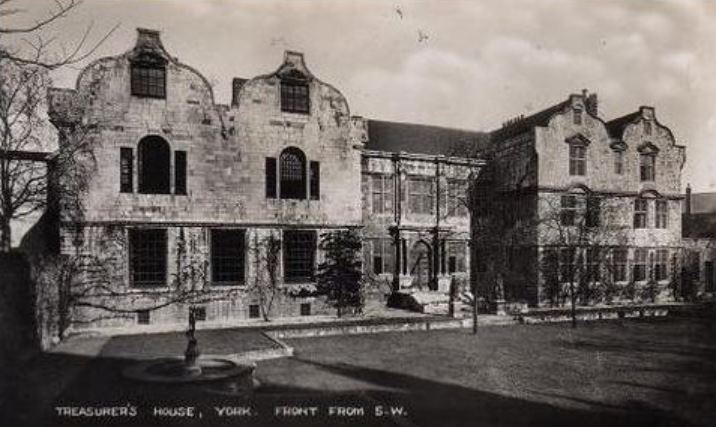 Soon he could tell it was not music, but rather just one or two notes being played over and over again, and as they grew louder he could pinpoint the source as the wall he was propped up against.

The sound became deafening, but that was the least of his worries. As Harry looked down to his side, in order to better ascertain what was happening, he was startled to see a plumed helmet come into view.

Suddenly he saw a soldier wearing a helmet emerge from a wall, followed by a cart-horse and 20 other soldiers emerged straight through the brick wall of the cellar!

Terrified, he fell from his ladder and stumbled into the corner and, as he crouched on the floor, he was able to see clearly that the horse was being ridden by a disheveled Roman soldier.

He was slowly followed by several fellows, dressed in rough green tunics and plumed helmets, carrying short swords spears and round shields. They all looked down in a dejected manner as they continued towards the Minster, apparently on their knees. 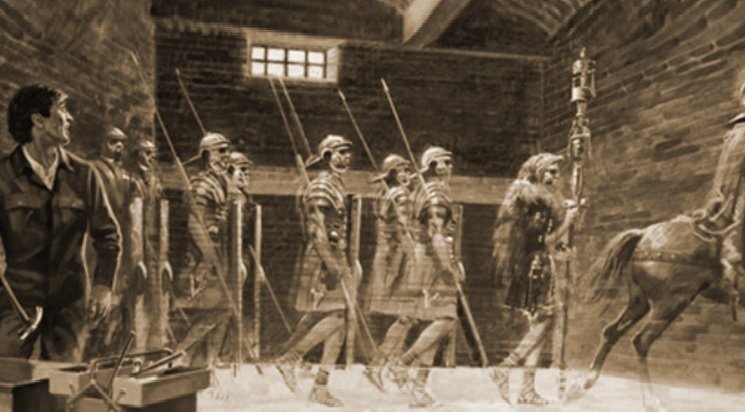 It emerged that the old Roman road into the garrison ran through where the Treasurer’s House was later built, and was about 15 inches lower than the cellar floor. The story also gained legitimacy after Harry described several aspects of the Roman soldiers’ clothing that he would not have known at the time.

The soldiers were heard talking to each other in whispers, and their faces seemed to be sad or tired. The uniforms, from what he could tell, seemed to be covered in mud. All were armed either with spears or swords.

Once all the soldiers had passed through the opposite wall, and Harry was certain he could hear no more approach, he made a run for it out of the cellar. When he was finally clear of the stairs leading out of the cellar he came to a stop to catch his breath. Those who saw him say he was completely white and was shaking.

The elderly gentleman who was in charge of the house took one look at Harry and knew what had happened. He walked up to Harry and said ‘You have seen the soldiers, haven’t you?’

The caretaker had seen the soldiers the previous year, but had not told anyone for fear of ridicule.

Harry left the house and did not return for at least 25 years.

Apparently, the ghostly troop had been seen several times in the past and impressive descriptions have been forthcoming from a number of witnesses.

As for the round shields, in 1953 it was believed that Roman shields were large and rectangular. Later excavations of Hadrian’s Wall discovered that auxiliary Roman soldiers did in fact have smaller, round shields.