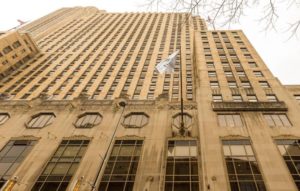 “Old, dated, haunted!” That’s what one reviewer had to say about the Hilton Netherland Plaza while giving it a two star review on Tripadvisor, accompanied by a photo that shows green orbs in the hallway outside their room.

The whole idea got started during the roaring 20s. We don’t know if it was bathtub gin or he did the Charleston for too long and over-oxygenated his brain but, for whatever reason, a businessman by the name of John Emery thought it would be a good idea to create a city within a city.

His building complex would contain shops, restaurants, offices and housing so those that stayed there would never have to leave. Emery’s concept was a little too out there for the banks, so when he couldn’t get financing he took the matter into his own hands and paid for the project himself by cashing in all his stocks.

His timing was excellent as the market crashed a couple of months later, beginning the Great Depression. Despite the dangers of skyscraper construction, thousands of Cincinnatians jumped at the chance of gainful employment and the hotel and adjoining Carew Tower were completed and open for business by January of 1931.

Several accidents occurred over the course of construction, the most notable being a painter that fell to his death while working on the ceiling of the Palm Court.

After the hotel opened the painter’s widow checked into a room on one of the upper floors, put on a green formal gown then jumped out of a window and landed firmly in hotel legend as the ghostly Lady in Green.

While she has been seen throughout the hotel’s existence, the Lady in Green was most active during the early 1980s when the hotel was closed for two years to restore the ornate decor that had been covered over during the 1960s.

The first of these sightings occurred when a construction worker arrived early one morning and walked into the famed Hall of Mirrors – where Jackie O and JFK once dined.

He was shocked to see a woman in a green dress standing on the other side of the room staring at the equipment that was scattered about. Knowing that no one was supposed to be in the building, he called out to the woman.

She immediately retreated through a door at the back of the room. The construction worker chased after the woman but found the back room empty.

A couple of days later she was spotted watching a crew as they worked on the mezzanine level. The workers assumed she was hotel management until she vanished before their eyes.

In more recent years there was a server delivering room service that was sharing an elevator with a pleasant woman in a green dress. Their conversation was going just swimmingly until he turned away for a moment, only to look back and find no one there.

The incident left the server so shaken that he took two weeks off to process the implications of his encounter.

Guests have also experienced the vanishing Lady in Green. One gentleman had just checked in and was walking down an empty hallway looking for his room when he was tapped on the shoulder.

The fellow turned around and saw our ghost just long enough for her to ask for his assistance and then, before he could answer, she dematerialized.

The Lady in Green doesn’t restrict herself to disappearing acts, though. A few years ago one guest of the hotel got the fright of his life when he felt a cold breeze across the back of his neck as he was riding alone in one of the elevators. When he turned to find the source of the breeze there she stood in all her green glory!

The Lady in Green also seems fond of a small wedding chapel located on the third floor. Since her story is based on an undying love it would make sense that she likes to attend weddings. She’s a true romantic. Folks also hear her sad plea for help in empty rooms quite often.

Another ghost of the hotel is a woman named Norma Jean Haller. The year was 1956 and Norma was five months pregnant and suffering from severe antepartum depression. When she attempted to throw herself in front of a bus Norma was admitted to a psychiatric hospital for 3 weeks.

After doctors declared her cured, poor Norma marched straight from the hospital to the Netherland Hotel, climbed the stairs to a window between the 28th and 29th floors then jumped. To this day people report sounds of sobbing and screaming in that area of the stairwell.

Over the years there have been a slew of other deaths at the hotel. In 1945 author Helen Eustis’ father committed suicide at the hotel by way of gunshot and in 2011 a beloved security guard was stabbed to death on the 6th floor stairwell.

It was his 58th birthday. Any one of these souls could claim responsibility for the experiences where guests have been terrified so greatly that they demand to check out in the middle of the night, refusing to return to their rooms to collect their belongings.

Even if you don’t go for the ghosts, the hotel, which is considered the finest example of French Art Deco design in the world, has a ton of other historic bragging rights along with one of the highest rated restaurants in the state.

Winston Churchill was so impressed with the suite he stayed in that he had it duplicated at his country estate, Bing Crosby once sauntered out of the hotel and ah-suh-suh-suh-sang to a crowd assembled out front from the top of his car and a 16 year old Doris Day made her professional debut in the Pavilion Ballroom – which was designed after a nightclub aboard the 1920’s luxury liner, the S.S. Leviathan.

So, if you find yourself in Cincinnati and are looking for an escape to a bygone era without sacrificing the convenience of modern times, put on the ritz and zip by the Hilton Netherland Plaza. It’s like the Great Gatsby, the Shining and the nightclub scene from Indiana Jones and the Temple of Doom had a beautiful, beautiful baby!