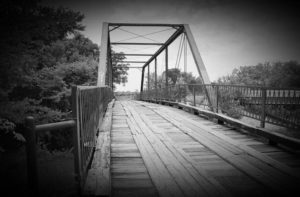 The Old Alton Bridge is not only a picturesque historical location, but it is also said to be haunted by the “Goatman,” giving the bridge its nickname.

Some 50 years after the bridge was built, an African-American man called Oscar Washburn, settled with his family near the bridge. Earning his living raising goats, he was soon affectionately known as the “Goatman” by the locals.

An honest businessman, his goat raising business was a success, and people came from all around to buy his milk and cheese, as well as the yarn his wife spun. Unfortunately however there were locals that did not welcome a successful black man in their midst.

When Washburn posted a sign on the bridge that advertised “this way to the Goatman,” it had the desired effect of bring Washburn more customers, but it also caught the attention of local Klansmen. On a dark night in August, 1938, members of the Ku Klux Klan crossed the bridge with their headlights turned off, and stormed Washburn’s shack and dragged the screaming Goatman to the bridge.

The Klansman then fitted a noose over his head and pushed the pleading Oscar Washman over the side of the bridge. However, when they looked over to make sure he was dead, they could see only the rope, undisturbed waters and no goatman. Washburn was gone and was never seen again.

The panicking Klansmen frantically searched the area without success, before rushing to Washburn’s shanty, setting it alight with Washman’s family shrieking inside, killing them all, in what was perhaps a bid to bait a desperate rescue attempt by the vanished Oscar.

Washburn was never seen again, but its said that his vengeful spirit has haunted the Old Alton Bridge ever since.

Ever since that fateful day, a number of strange things have reportedly occurred on and around the bridge. Many believe that the Goatman haunts the overpass and the nearby woods.

A number of other reports tell of numerous abandoned cars that have been found near the bridge, with their occupants missing. The tale continues that when travellers crossed the bridge at night with their headlights off, they would meet the Goatman on the other side. People tell stories of seeing mysterious lights in the area, of car doors locking and unlocking of their own accord, a numerous vehicle breakdowns while near the old viaduct. These tales are obviously old, as the bridge has been closed to vehicle traffic since 2001.

Others report seeing a ghostly man herding goats over the bridge, while others say they have seen an apparition staring at them, holding a goat head under each arm. Stranger stories even include people having seen a creature that resembles a half-goat, half-man.

Strange noises have also been heard, including the sounds of horses’ hoof beats on the bridge, splashing in the creek below, maniacal laughter, and inhuman like growling coming from the surrounding woods.

According to legend, if you visit on Halloween and honk your car horn twice, visitors can see Goatman’s glowing eyes.

Old timers warn that knocking three times on the trusses of the bridge is an invitation to the Goatman to appear, and other legends say that people with the bloodlines of Klansmen or slaveowners will be taken by him into the woods in order for him to exact his revenge upon them.

And, the Goatman is evidently not alone. Other reports tell of a woman’s spirit who wanders the area allegedly in search of her lost baby.