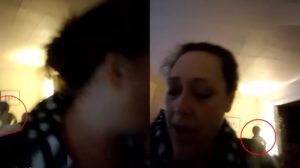 Recently, Lori Simmons was scared of her life when her friend saw someone standing behind her. Lori had spoken to her best friend Shana Thomas at home through the Marco Polo video messaging app when she realized that something was wrong.

“I just moved into my apartment, so I chatted with my friend on video to show her around and I talked about general things,” she said. “But suddenly, her face became very serious and she asked if someone was with me in the house.”

“I live alone, but I looked around instantly because it was so strange the way she said it, and it really scared me. I told her I was alone at home. She looked pretty shocked…”

Lori noticed a strange figure standing in the background after reviewing the footage.

“I really couldn’t believe what I saw,” she said. “It was so frightening. It sent down my back chills and shocked me so much. I have had many paranormal experiences in my life, but nothing like that.”

The figure can be clearly seen several times over her shoulder in the footage that can be seen above. It also seems to move around the room instead of staying in one place.

“At my work, I showed the video to people and they shouted,” Lori said.

” I’ve probably watched this video 1000 times and it still creeps me out.”