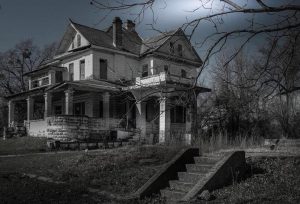 You’ve unpacked the last box, finished arranging everything just so and collapse into your favorite chair. Then it begins, an occasional flit of shadow and the strange thumping.

At first you’ll probably put it down to the house settling, your pet getting accustomed to a new home, or the neighbor’s teen-agers.

After a while you’ve exhausted all other possibilities, so you come to the conclusion that your humble abode is definitely haunted. Curiosity gets the better of you, and you start to wonder just who is the sprit that inhabits your home?

To find your ghost’s identity you will need to do some research.

Ask your neighbors what they know of your home’s history. Someone in the neighborhood just may remember some very intriguing information concerning your home. But you’ve got to ask.

Years ago a young couple moved into a small duplex and soon began having terrible dreams. No matter what they did, they couldn’t keep her bedroom warm. Even in the heat of summer it was cold enough to set teeth chattering.

Exasperated, they finally asked her landlord why the room was so cold. He shrugged his shoulders and professed ignorance.

Not the shy retiring sort, couple went through the neighborhood asking if anyone remembered anything out of the ordinary happening on the street. Two blocks away she met an elderly widow who told her about a terribly gruesome murder that had taken place in the apartment decades past.

After a day’s research at the library, they found the reasons for the nightmares and the cold. The couple had chosen as they bedroom the very room the murder had taken place in.

With this knowledge in hand they was able to demand, and get, all her deposits, cleaning fees and last month’s rent from the landlord. If a couple had purchased the duplex, they might have been stuck.

Besides your neighbors, there are many other ways to research your home’s history. Old tax records can be a source for discovering who your home’s previous owners were. But the library is probably your best bet, particularly if has a helpful research department.

If you’ve found nothing at the library you may want to check with the local newspaper. Sure, foraging through old newspaper files is tedious and time-consuming. But the results can be amazing.

If your area has a historical society you may want to ask for help there. But remember people’s memories blur and fade with time. Often times people are hesitant to tell someone of a tragedy that occurred in their residence. Perhaps this falls under the old “ignorance is bliss” heading.

If you’re lucky enough to have a psychic as a friend you might be able to learn something about your new home and ghost. However, being a psychic is not like being a doctor or a lawyer.

There are no exams, and no course of study required. Consequently, anyone who feels the least bit intuitive can claim to possess psychic powers, but are their feelings accurate?

Resourceful folks may even decide to bring out an Ouija board or hold a séance in an attempt to identify the resident ghost. For what it’s worth, we don’t recommend either option if you’re serious about your research. The findings probably won’t be verifiable or very reliable.

Discovering who haunts your home, and why, is a formidable task. But with a little perseverance, you just may succeed. Happy researching.