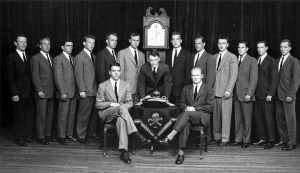 A secret society is a very often non-official group or organization whose activities and inside functioning are hidden from non-members.

Participants use secrecy to cover themselves and their movement. Experts look at Secret Societies as malicious organizations working opposing the general will of mankind. ‘

The Fenian Brotherhood was an Irish nationalist organization dedicated to eradicating British rule in Ireland. Founded by John O’Mahony in 1858, the American-based group hoped to achieve its aims by invading British-occupied Canada and holding it hostage in return for Ireland’s emancipation. As far-fetched as their plan may sound, it wasn’t without merit.

After all, the Brotherhood counted among its members thousands of men who had fought during the American Civil War and it had the financial support of tens of thousands of Irish immigrants. Equipped with military training as well as patriotic love, the Fenians attacked Canada on three separate occasions in 1866, 1870 and 1871.

On each occasion, they were repelled by a combination of Canadian voluntary forces and American government intervention. The movement eventually fell apart, but its legacy is still felt: According to many historians, the risk posed by the Fenians was one of the most important impetuses for the confederation of Canada. The Fenian Brotherhood was named in honor of the Fianna, a brave band of ancient Irish warriors.

The Krypteia was an ancient rite of passage for promising young Spartan men who had completed their formal education. Naked and armed with only a knife, these 18-year-olds were instructed to survive by any means necessary as they patrolled the countryside in search of revolts and misdeeds.

Those who survived (and indeed many did perish) were welcomed with open arms into the Spartan army. According to tradition, members of the Krypteia were permitted to kill serfs known as “Helots” without fear of blood guilt.

The Black Hand was a secret society of anti-imperialist political revolutionaries that was started in Serbia in 1912. It formed as an offshoot from Narodna Adbrona, a group that sought to unite all of the Slavic people of Europe under one country. This required the separation of Serbia from the monarchy of Austria-Hungary, which had annexed the country some years before.

With this in mind, the group began disseminating anti-Austrian propaganda and training saboteurs and assassins to disrupt political rule within the province. Their plan was to incite a war between Serbia and Austria, which would give them a chance to free their country and unite the different Slavic nations as one. Black Hand would be all but forgotten today if not for their unlikely involvement in one of the biggest events of the twentieth century.

In 1914, the group engineered the assassination of the Austrian Archduke Franz Ferdinand. The job was badly botched, and was only completed when a low-level hood named Gavrilo Princip stumbled upon the Archduke’s car and shot him to death at close range (see photo). Still, the results of the assassination were catastrophic. Within days, Austria-Hungary had declared war on Serbia, and after the allies of both countries joined the fray, the small dispute managed to escalate into WWI. The aftermath of WWI eventually led to WWII, and this led to the Cold War, which makes the Black Hand one of the most strangely influential forces of the twentieth century.

Ordo Templi Orientis is a mystic organization that was started in the early twentieth century. The group was established along the same lines as the less secretive Freemasons, and supposedly relies on ritual and occult practices as a means for members to move from one level of prestige to another within the organization. The general philosophy of the group was a belief in new age esoteric principles and practices as a method of realizing one’s true identity.

Famed occultist and all-around eccentric Aleister Crowley composed much of the group’s lore, including a manifesto called the Mysteria Mystica Maxima, and he later became its head. After his death, the influence and popularity of Ordo Templi Orientis began to wane, but it still exists today and has various chapters scattered across the world, chiefly in the United States, the U.K., and other parts of Europe.

As Aleister Crowley’s popularity as a new age figure has continued to grow, more and more of the teachings of the Ordo Templi Orientis have come to light. As such, the group makes much less of an attempt to be secretive today than it did in the past. This doesn’t mean that they don’t still have some bizarre practices. Chief among these is the group’s fixation on the sexual, especially their teachings on the “adoration of the phallus” and the magic of self gratification.

Vril is a substance described in Edward Bulwer-Lytton’s 1871 novel The Coming Race, which was later reprinted as Vril: The Power of the Coming Race. The novel is an early example of science fiction. However, many early readers believed that its account of a superior subterranean master race and the energy-form called “Vril” was accurate, to the extent that some theosophists accepted the book as truth.

Furthermore, since 1960 there has been a conspiracy theory about a secret Vril Society. Speculation on Vril has not ceased. The legend has received a further layer of elaboration from recent authors like Raymond Bernard who conflate Bulwer-Lytton’s “Coming Race” with speculations about interior civilizations which live on the inside of the Hollow Earth. (The concept of a hollow earth was first advanced by Edmond Halley at the end of the seventeenth century.)

By contrast, Bulwer-Lytton’s subterranean people dwelt in caverns within the crust of a solid earth. The world of the Vril-ya is always described as being underground tunnels, artificially lit (using Vril). The book contains no suggestion of a hollow earth; theories of this kind are only found in subsequent works. Bulwer-Lytton makes many references to the scientists of his time such as Faraday and Darwin proving the existence of Vril.

Majestic 12 is the alleged code name of a secret committee of scientists, military leaders, and government officials, supposedly formed in 1947 by an executive order of U.S. President Harry S Truman. The alleged purpose of the committee was to investigate UFO activity in the aftermath of the Roswell incident—the supposed crash of the alien spaceship near Roswell, New Mexico, in July 1947.

The Majestic 12 is an important part of the UFO conspiracy theory of an ongoing government cover up of UFO information. All the alleged original members of MJ-12 were notable for their military, government, and/or scientific achievements, and all were deceased when the documents first surfaced.

The Thule Society, was a German occultist and völkisch group in Munich, named after a mythical northern country from Greek legend. The Society is notable chiefly as the organization that sponsored the Deutsche Arbeiterpartei (DAP), which was later transformed by Adolf Hitler into the National Socialist German Workers’ Party (Nazi Party).

There is no evidence that Hitler ever attended the Thule Society. But there was great enthusiasm among Thule members for Hitler, most notably Rudolf Hess and Dietrich Eckart. The occultists believed Hitler to be the prophesied “redeemer of Germany”. They were Hitler’s first “disciples” and as such were crucial to his meteoric rise. A primary focus of Thule-Gesellschaft was a claim concerning the origins of the Aryan race. “Thule” was a land located by Greco-Roman geographers in the furthest north (often displayed as Iceland).

The term “Ultima Thule” is also mentioned by the Roman poet Virgil in his pastoral poems called the Georgics. Although originally Thule was probably the name for Scandinavia, Virgil simply uses it as a proverbial expression for the edge of the known world, and his mention should not be taken as a substantial reference to Scandinavia.

They identified Ultima Thule, said by Nazi mystics to be the capital of ancient Hyperborea, as a lost ancient landmass in the extreme north: near Greenland or Iceland. These ideas derived from earlier speculation by Ignatius L. Donnelly that a lost landmass had once existed in the Atlantic, and that it was the home of the Aryan race, a theory he supported by reference to the distribution of swastika motifs.

Ku Klux Klan, often abbreviated KKK and informally known as The Klan, is the name of three distinct past and present far-right organizations in the United States, which have advocated extremist reactionary currents such as white supremacy, white nationalism, and anti-immigration, historically expressed through terrorism. Since the mid-20th century, the KKK has also been anti-communist.

The current manifestation is splintered into several chapters and is classified as a hate group. Klan members adopted masks and robes that hid their identities and added to the drama of their night rides, their chosen time for attacks. Many of them operated in small towns and rural areas where people otherwise knew each other’s faces, and sometimes still recognized the attackers.

“The kind of thing that men are afraid or ashamed to do openly, and by day, they accomplish secretly, masked, and at night.” With this method both the high and the low could be attacked.[38] The Ku Klux Klan night riders “sometimes claimed to be ghosts of Confederate soldiers so, as they claimed, to frighten superstitious blacks. Few freedmen took such nonsense seriously.” The Klan attacked black members of the Loyal Leagues and intimidated southern Republicans and Freedmen’s Bureau workers.

When they killed black political leaders, they also took heads of families, along with the leaders of churches and community groups, because people had many roles. Klan violence worked to suppress black voting. In reaction to social changes, the Klan adopted anti-Jewish, anti-Catholic, anti-Communist and anti-immigrant slants. They still exist today.

Opus Dei is an organization of the Catholic Church that emphasizes the Catholic belief that everyone is called to holiness and that ordinary life is a path to sanctity. The celibate numeraries and numerary assistants live in special centers, while associates are celibate members living in their private homes. The order was founded in Spain in 1928 by Roman Catholic priest Josemaría Escrivá with the approval of Pope Pius XII.

When Dan Brown’s Da Vinci Code was published, it claimed that Opus Dei was a secret organization within the Church whose aim was to defeat the Priory of Sion and those who seek to uncover the “truth” about Christianity and the alleged royal bloodline of Christ. Outside of the book, there has been a great deal of controversy over Opus Dei because of the strictness of its religious structure. The Catholic Church forbids secret societies and membership in them, and Opus Dei investigators have frequently debunked claims that this organization is acting in secrecy to further a sinister agenda.

The Priory of Sion

After the publication of the Da Vinci Code by Dan Brown, a great deal of interest in the Priory of Sion has been created. The Prieuré de Sion, translated from French as Priory of Sion, is a name given to multiple groups, both real and fictitious. Unfortunately for those hoping to find and join the Priory, it is claimed fictional by many.

They say it was a hoax created in 1956 by a pretender to the French Throne, Pierre Plantard. Despite this, many people still continue to believe that the Priory exists and functions to this day. The authors of the well known book, The Holy Blood and the Holy Grail, misled by the hoax, stated:

1. The Priory of Sion has a long history starting in AD 1099, and had illustrious Grand Masters including Isaac Newton and Leonardo da Vinci.
2. The order protects certain royal claimants because they believe them to be the literal descendants of Jesus and his alleged wife Mary Magdalene or, at the very least, of king David.
3. The priory seeks the founding of a “Holy European Empire” that would become the next hyperpower and usher in a new world order of peace and prosperity.