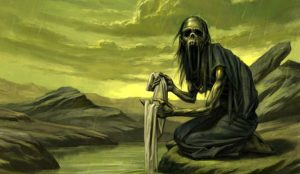 A Banshee is an Irish female spirit who wails outside a home to warn of the imminent death of a family member. Often heard before she is seen, her wailing is that high-pitched that nobody willingly dares to attempt to witness this terrifying spirit.

In Ireland, the Banshee does not bring or cause death but warns loved ones that death is imminent, which gives the family a chance to prepare. Some believe that she acts as an escort to ensure that their loved one passes safely to the other side.

The scream is also called ‘caoine’ which means ‘keening’ and is a warning that there will be an imminent death in the family.

Originally it was said that the Banshee only keened for the families, O’Grady, O’Neill, O’Brien, O’Connor and Kavanagh. However, there are stories from various other families and that she particularly favours those with an ‘O’ or a ‘Mc’ in the surname such as O’Brien or McNeill for example, but as the Irish families blended over time, it is said that each family now has its own Banshee.

A Banshee is a disembodied spirit and can appear in many forms, however, in Ireland, she has been most commonly seen as either a beautiful young woman with long, flowing silver/white hair, wearing a white dress, or as an old woman in rags with dirty grey hair, long fingernails and sharp-pointed rotten teeth. Both descriptions also describe the Banshee eyes as being noticeably red from crying so much.

Whilst there are numerous descriptions of what the what the Banshee looks like, what all witnesses of the Banshee can agree on, is its terrifying wailing.

Historians have traced the first stories of the Banshee to the 8th century which were based on a tradition where women sang a sorrowful song to lament someone’s death. These women were known as ‘keeners’ and since they accepted alcohol as payment, they were said to be sinners and punished by being doomed to become Banshees. According to the mythology of the Banshee, if she is spotted, she will vanish into a cloud of mist and this action creates a noise similar to that of a bird flapping its wings. Legend says that Banshees don’t cause death, they only serve as a warning of it.

Not all Banshees are the hate-filled creatures of horror stories that we see today, there are some that had strong ties to their families in life and continued to watch over them in death. When they manifest themselves, these Banshees appear as beautiful enchanting women that sing a sorrowful, haunting song which is filled with concern and love for their families. This song can be heard a few days before the death of a family member and in most cases the song can only be heard by the person for whom it is intended.

However, we also have the angry and scary Banshee that most of us are familiar with. During their lives, these women had reasons to hate their families and appear as distorted and frightening apparitions filled with hatred. The howls emitted by these Banshees are enough to chill you to the bone and rather than appearing to warn a family member, these Banshees are celebrating the future demise of someone they loathed!

Other Irish legends relating to the Banshee say that she is the ghost of a young girl that suffered a brutal death and her spirit remains to warn family members that violent death is imminent. It is said that this Banshee appears as an old woman with rotten teeth and long fingernails. She wears rags and has blood red eyes that are so filled with hate that looking directly into them will cause immediate death! This Banshee’s mouth is always open as her piercing scream torments the souls of the living.

According to some tales, there are evil Banshees that derive pleasure from taking a life and they actively seek out their victims and wail at them to the point where the person commits suicide or goes insane. There are even stories of Banshees that can tear people to shreds and these horrific apparitions are what feature in modern day horror films.

However, in reality, Banshees do not bring death, they are just harbingers of it, and are giving the family time to prepare for the inevitable passing of their loved one.