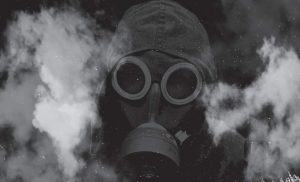 A chronology shows the incidents happened in less than a month. Authorities had theories, but none to fully explain the anomalous Mad Gasser.

In 1933, Botetourt County, Virginia was a quiet area in the commonwealth. Nothing out of the ordinary happened until December 1933 and continued into the following year. Someone or something unknown was visiting the area.

December 22: Mr. and Mrs. Cal Huffman’s home was attacked by a spray of a strange gas which made the residents feel nauseous. The only clue police found was an imprint of a woman’s shoe under the window where the gas came from.

December 24: Clarence Hall, his wife and two children came home from church and they smelled a strange odor. They also became nauseated. An investigation revealed a nail had been pulled from one of the windows.

December 27: A.L. Kelly and his mother were sprayed inside their home. Police learned that a man and a woman in a 1933 Chevrolet had been seen driving back and forth in front the Kelly house around the time of the attack. A neighbor got a partial license number, but the police were unable to locate the car.

January 10: Mrs. Moore was sleeping downstairs at her parents’ home when she woke up to care for her baby. She heard muffled voices outside and someone fiddling with the window. Moments later, the room was filled with gas. Neighbor G.E. Poage also heard voices.

January 16: F.B. Duval’s home was attacked. He left the house to call the police. As he reached a nearby intersection, he saw a man get into a parked car and speed away. The next day, a woman’s shoe prints were found where the car was parked.

January 21: The Howard Crawfords’ home was attacked. Police officers found one clue, a crank for an old automobile.

January 22: three separate attacks occurred. In one hour, the Gasser covered a distance of about two miles, attacking homes in order. Ed Reedy’s, George C. Riley’s and Raymond Etter’s houses were attacked. All victims were nauseated. A blockade of the nearby roads was formed. The Gasser eluded the authorities, but one of Mr. Etter’s sons claimed he saw a figure running away from the house.

January 23: When the Hartsell family returned home, they discovered that the house was filled with gas. Someone had piled wood and brush up against their front door.

January 28: The Gasser attacked again at Ed Stanley’ house. Frank Guy, a hired hand, immediately ran outside after the gas filled the house. He said he saw four men running away.

January 30: The Stanley House was attacked again. Stanley heard a sound outside the window before the attack. No further details are on record.

February 3: A.P. Skaggs’ house was under siege. He, his wife and five other adults were affected by the gas.

The authorities had been growing more concerned with the gassing incidents. At first, they believed the attacks were pranks. If this were true, the perpetrator(s) would have been caught.

Then, the authorities considered the possibility that a lunatic was responsible. This postulation was equally invalid. The authorities had another unconvincing theory that faulty chimney flues and wild imaginations created the incidents.

Mass hysteria? The incidents that happened after February 3rd helped show that the original ones weren’t hysteria. The later cases didn’t follow the pattern of the originals, occurred outside of the established area, happened at no particular time and didn’t cause any physical effects.

The original attacks were spread out enough so that neighbors couldn’t influence each other with hysteria.

The Mad Gasser left his mark. There was no logical explanation. What ever it was, the Mad Gasser had intelligence as evidenced by its rampages. Was the Mad Gasser to reappear eleven years later in Illinois?