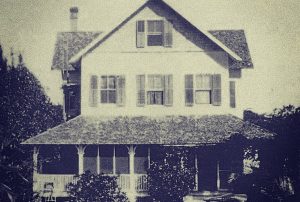 Riddle House, located in West Palm Beach’s Yesteryear Village, has had a long history of paranormal activity. Built in 1905, the house has been used as a funeral parlor, cemetery office, and even a dormitory.

It has been investigated by paranormal experts such as The Florida Ghost Team and by the Travel Channel’s Ghost Adventures team. The investigations have shown evidence of both residual hauntings and intelligent ghost activity. Riddle House remains one of Florida’s most active haunted spots.

Riddle House was built in 1905 on property owned by Joseph Jefferson, a famous actor of that time period. It was originally located across the street from Woodlawn Cemetery in West Palm Beach at 327 Acacia Street.

In the early 1900s, it was very common for people to be buried with their jewels, and as a result, bodies were exhumed and robbed at Woodlawn Cemetery. This created a need for security at the cemetery, and the house, then called “Gatekeeper’s Cottage” was built. The house also served as a funeral parlor and general office for the management of cemetery.

One of the earliest paranormal incidents happened after an argument between a cemetery worker named “Buck” and someone from the town. A fight ensued and “Buck” was killed. Soon after, “Buck” was seen wandering the cemetery and was even seen at the cottage.

This was never felt to be a malevolent entity however. In 1920, Karl Riddle became the city manager and superintendent of the Public Works Department and he moved into the Gatekeeper’s Cottage. He became an overseer of the cemetery in addition to his other duties. It was at this time that the name of the house was changed to Riddle House.

The Haunting of Riddle House

It was after Karl Riddle moved into the house that paranormal activities began to increase. A worker named Joseph, who had financial and domestic problems, hung himself in the attic of Riddle House.

One theory states that Joseph was being accused of stealing, and that feelings of anger and despair caused him to take his life. Whatever the cause of this suicide, Karl Riddle and his family began to notice an increase in paranormal events soon after Joseph’s death.

The Riddle family and their employees began to hear noises such as distant conversations, strange knocking, and something that sounded like chains. His workers left because of these disturbances and Karl Riddle’s family eventually left as well.

In 1980, the City of West Palm Beach wanted to tear down Riddle House. It had been abandoned for years and was falling apart. John Riddle, Karl Riddle’s nephew, thought that the house had historical value and should be saved.

A decision was made to move Riddle House to Yesteryear Village, a ten-acre museum showcasing replicated buildings, artifacts, and other items from the early years of Florida. The building was moved and reconstruction on Riddle House began.

After reconstruction started, dark paranormal activity within the house increased. Ladders were moved or tipped over, windows were broken, and a carpenter named Steve Carr was hit over the head with a lid from an iron pot that flew across the room.

The attacks were blamed on Joseph, the spirit of the worker who hanged himself in the attic, and men were no longer encouraged to go into the house because of these vicious attacks. After a six month break in reconstruction, the Riddle House was finally restored to its Victorian glory.

On the day that the public was able to enter the house for the first time, it’s said that a couple dressed in early twentieth century clothing was seen walking through Yesteryear Village.

Guests assumed them to be workers in period costume. When pictures of Riddle House in its original location were unveiled on a plaque, the same two people were seen in the picture. Could they have been spirits from Riddle House’s past?

Riddle House remains a highly active location. Workers have their hair pulled, lights frequently turn on and off, furniture moves, and American flags disappear from closets. Music from the 1920’s can be heard in the attic and voices are often heard in the childrens’ room. Workers now warn the house’s entities before they enter the house, because of fear of attack.

Cold spots, indicating the possible presence of a spirit were felt all over the house, and an American flag was knocked over. An EVP (electronic voice phenomenon) caught the sound of a child’s voice in the toy room, and while alone in the attic, Aaron had a large birdcage knocked over behind him.

The Florida Ghost Team also investigated Riddle House, but felt that they did not come up with conclusive results despite hearing footsteps and having strong EMF (electomagnetic field detector) readings where the hanging took place.

Riddle House remains a highly active paranormal location with residual hauntings and intelligent ghost activity. There is definitely a dark, malevolent spirit that does not like men and that was very unhappy with the move to Yesteryear Village. It is felt by investigators and by psychic mediums that the spirit is Joseph, the worker who hanged himself in the attic.

Are there other spirits attached to the house who are unhappy with the move as well? Riddle House appears to have many more secrets waiting to be revealed.