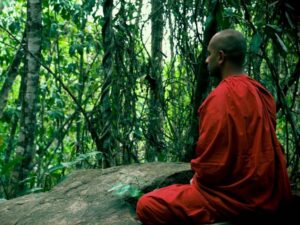 It is believed that one of the most remarkable effects of lifelong meditation may be the relatively slow aging process of the body. A recent proof of this was the death of Tibetan Buddhist monk Geshe Lhundub Sopa on August 28, 2014 at the age of 91.

Geshe Lhundub Zopa, who was the mentor of the Dalai Lama in Tibet, moved to Wisconsin in 1967. There he co-founded the Deer Park Buddhist Center and taught South Asian Studies at the University of Wisconsin, becoming a friend of the eminent American neuroscientist Richard J. Davidson.

According to Daniel Burke, former editor of CNN’s religion department, Davidson recalls the scene as follows:

Three days after his cardiac arrest, Geshe Lhundub Zopa was leaned against the wall, his odorless body completely motionless, his skin fresh. He looked like he was meditating…

Zopa died on 28 August 2014. Five days later, two days after Davidson’s first visit, the neuroscientist returned to Deer Park and examined his friend’s body a second time. “There was absolutely no change. It was really very amazing,” he said.

Tibetan Buddhists believe that such monks have not died yet, but are in a deep, final meditative state called tukdam, during which consciousness is gradually transformed into clear awareness (“clear light”), after which the body begins to decay. Seven days later, Sopa’s body began to decompose and he was cremated.

Davidson and colleagues investigated the tukdam phenomenon with neuroscience tools.

Curiously, their original work, published earlier this year, found no brain wave activity in the deceased monks. Here’s the annotation:

Recent studies of EEG in the early postmortem interval, which indicate the preservation of electrophysiological coherence and connectivity in the brains of animals and humans, reinforce the need for further study of the relationship between brain activity and the process of dying.

Currently, neuroscience has the ability to empirically assess the long-term dying process and, more specifically, to investigate the possibility of brain activity after the cessation of cardiac and respiratory function.

Under the direction of the Center for Healthy Mind at the University of Wisconsin-Madison in India, research has been carried out on a posthumous meditative state cultivated by some practitioners of Tibetan Buddhism in which decay is believed to be delayed.

Whether the monks meditate posthumously or not, it is unclear why their bodies do not decompose for so long. Decomposition usually occurs within hours of death.

Western medicine must already change its conventional definition of death, argue John Dunn and Davidson. As Tibetan Buddhists have long believed, biological death is more like a process – or a journey through various states.

Of course, this phenomenon raises questions about the nature of consciousness:

Consciousness itself is an example. Although intelligent beings, including humans, have been conscious for centuries, we still do not know what consciousness really is: what is its overall nature and how it functions.”

Tukdam is a more complex puzzle, but it points to the possibility that consciousness is not connected to the brain exactly as we thought.