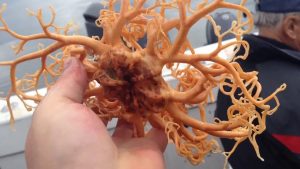 Near the Prince of Wales island in the Canadian Arctic archipelago, which is located in Alaska, some fisherman caught something unidentified. The strange creature was incredibly creepy, besides actively moving its tentacles.

The video was uploaded to Facebook by Sarah Vasser-Alford. In just a few weeks, a million people watched the video. The post gained 17 thousand reposts and 1.3 thousand comments.

Many were inclined to the fact that the video shows some rare species of sea stars.

Also, some spoke of brittle stars – bottom marine animals. It has limbs that wriggle like snakes.

Unfortunately, there is no exact answer. Discussions about the kind of creature continue to this day.