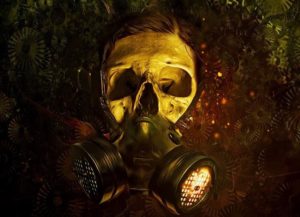 The Mad Gasser is said to have been a mysterious being, described as a woman disguised as a man, who supposedly gassed residents in the town of Mattoon, Illinois (population 15,827, according to the 1940 census) for two long weeks, in late August and early September 1944.

Interestingly, similar stories had been reported in the winter of 1933 through 1934 in Botetourt County, Virginia. These stories featured a gasser, a sweet odor, a strange paralysis, a mysterious stranger, panicked residents, and even a woman’s footprints under a bedroom window.

In both cases, public officials eventually decided that mass hysteria was the source of the stories rather than any real gasser. However, the Virginia stories were never reported in Illinois, leading some to wonder how hysteria in one town could cause mass sightings of the mysterious Mad Gasser in another.

The first Mad Gasser attacks supposedly took place on August 31, 1944 when four people living in two different houses awoke in the night feeling so ill that they were unable to get out of bed. That night a resident woke up feeling ill. He managed to get to the bathroom before he threw up.

On returning the bedroom, he asked his wife if she had left the gas on. She said she hadn’t, but when she tried to get up to check, she found she could not move. Elsewhere in town a young mother who heard her daughter coughing in another room also tried to leave her bed, with similar lack of success.

At 11 p.m. on September 1 a “sickening sweet odor in the bedroom” roused another young mother, Mrs. Bert Kearney, from sleep. As the odor quickly grew stronger, she “began to feel a paralysis of my legs and lower body,” she reported. “I got frightened and screamed.” An hour and a half later her husband, who was coming home from work, observed a strange man standing at the bedroom window. Kearney described him as “tall, dressed in dark clothing and wearing a tight-fitting cap.” Kearney gave chase, but the prowler escaped.

After these stories were reported in the local newspaper, several other attacks were reported on subsequent nights, all of them involving a mysterious stranger, sudden paralysis, and an odd, sweet-smelling gas. One of them claimed to see a woman dressed in men’s clothing lurking under a bedroom window, apparently spraying gas near the glass. The next morning a woman’s footprints were found in the same spot. 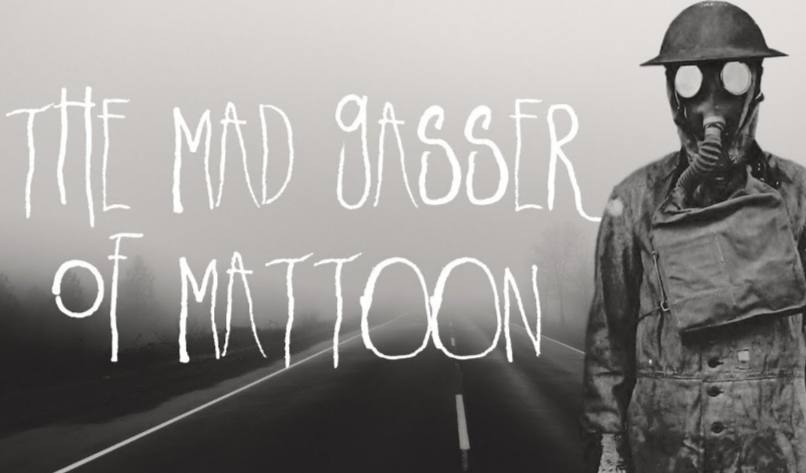 These events took place before anyone had heard of a “mad gasser” or “phantom anesthetist,” and whatever inspired the stories, it cannot have been mass hysteria. Unfortunately, at this stage the Mattoon Journal-Gazette picked up the story, calling Mrs. Kearney the “first victim,” which not only was untrue but which also implied that more “victims” would join her. As it happened, other alleged attacks did follow, all reported in the kind of overwrought prose that frightened more than informed.

A doctor called to the scene of one of these incidents smelled the gas, too, adding credibility to the reports. Police who investigated could find no evidence of gassing or of the mysterious stranger, however. No one else had seen the gasser, but late on the evening of September 5, as one couple returned home, the wife noticed a white cloth by the front door.

When she picked it up, she happened to sniff it. “I had sensations similar to coming in contact with an electric current,” she recounted. “The feeling raced down my body to my feet and then seemed to settle in my knees. It was a feeling of paralysis.” Soon her lips and face were burning and swelling, her mouth was bleeding, and she was throwing up.

These dramatic symptoms had subsided by the time police got there, but their visit produced what seemed to be the first physical evidence: a skeleton key and an empty lipstick tube near the spot where the cloth had lain. Even as officers were interviewing the couple, however, a woman elsewhere in town was hearing a prowler outside her bedroom window. Before she could sit up, a gas seeped into the room rendering her immobile for several minutes.

As the days passed and the attacks continued, the community was outraged that the local police had not been able to catch the perpetrator. Meanwhile armed citizens prowled the streets at night, in defiance of the police commissioner’s plea for them to get a grip on themselves.

He said that a “gas maniac exists” but “many of the attacks are nothing more than hysteria. Fear of the gas man is entirely out of proportion to the menace of the relatively harmless gas he is spraying.” Rumors were flying: the gasser was a lunatic, an “eccentric inventor” (the commissioner’s pet theory, soon to be abandoned), or even an “apeman.” The reasons for this curious last notion are lost to history.

The scare climaxed on September 10, a Sunday night, with two attacks that felled a total of five persons. By the next morning police were talking more and more skeptically, pointing to the absence of solid evidence and stipulating that all further complainants undergo examination at Mattoon Memorial Institution.

A chemical analysis of the cloth came to no particular conclusions. The next evening,when the police got calls from persons reporting attacks, the calls were dismissed as false alarms, even though in one case a physician who went to a victim’s house smelled the gas himself.

At a press conference on the morning of September 12, the chief of police told reporters, “Local police, in cooperation with state officers, have checked and rechecked all reported cases, and we find absolutely no evidence to support stories that have been told.

Hysteria must be blamed for such seemingly accurate accounts of supposed victims.” Beyond that, he theorized, the odor of carbon tetrachloride from a nearby chemical plant may have been carried on the wind. He did not explain why this had not been a problem for Mattoon residents prior to August 31.

Even in the face of this official denial of his existence, the gasser made one last house call. On the evening of the September 13 a witness saw a “woman dressed in man’s clothing” spray gas through a window into Bertha Burch’s bedroom. The next morning Mrs. Burch and her adult son found footprints of high-heeled shoes under the window. For reasons that will be apparent shortly, this may be the single most interesting case to come out of Mattoon.

Similar series of events took place about a decade earlier in Botetourt County, Virginia, in December 1933 and January 1934. Except for a brief item in the January 22, 1934, edition of the New York Times, the scare got only local (Virginia) coverage. It is highly unlikely that Mattoon residents were aware of it.

The first recorded attack in Virginia occurred at a farm near Haymakertown late on the evening of December 22, 1933 when three separate infusions of gas into the house sickened eight members of a family and a visitor. Some of the victims thought they saw a man fleeing in the darkness. The gas caused nausea, headaches, facial swelling, and constriction of mouth and throat muscles.

One victim, a nineteen-year-old woman, suffered convulsions for weeks afterwards. A police officer who arrived between the second and third attacks — after staying an hour, he left, and soon afterwards gas wafted through both floors of the house — found only one clue: the print of a woman’s heel under the window the gas was believed to have passed through.

Over the next two weeks other persons reported similar nocturnal attacks. In one case witnesses saw a 1933 Chevrolet, with a man and woman inside, passing back and forth in front of a house around the time its occupants experienced the mysterious gas. In another instance a young mother attending to her baby said she heard a rattling window shade and mumbling voices outside.

Suddenly the room filled with gas, and her body felt numb.While on his way to summon police after a gassing at his farm, F. B. Duval saw a man run toward a car parked on a rural road and drive away quickly.Duval and an officer examined the site soon afterwards and found prints of a woman’s shoes.

Amid growing panic, residents of the county armed themselves and prowled back roads in search of suspicious strangers. On one occasion a searcher fired on a fleeing figure. On another, moments after a gas attack, one of the victims dashed outside in time to glimpse four men running in the direction of the nearby Blue Ridge Mountains.

By the time the witness returned with a gun, he could no longer see them, but he could hear their voices. Despite skepticism in some quarters concerning the gasser’s (or gassers’) existence, physicians who had called on victims were certain he was (or they were) real. County Sheriff C. E. Williamson was likewise convinced.

One of the last gassings was reported near Lithia in nearby Roanoke County. Afterwards the victim found discolored snow with a sweet-smelling, oily substance in it. When analyzed, it turned out to consist of sulfur, arsenic, and mineral oil — something like the components, authorities thought, of insecticides. A trail of footprints led from the house to the barn, but none away from the barn. They were, according to press accounts, a “woman’s tracks.”

Michael T. Shoemaker, who investigated the episode in the 1980s, noted its many similarities to the later scare at Mattoon. “In both Mattoon and Botetourt,” he wrote, “the principal physical effects were the same: a sickeningly sweet odor, nausea, paralysis, facial swelling and unconsciousness. These effects were confirmed by doctors and, moreover, in both cases doctors smelled the gas.

Both gassers made repeat attacks on one family,multiple attacks in one night and assaults on unoccupied houses. The pattern of explanation was also similar, progressing from pranksters to lunatics to hysteria. Tantalizing but useless clues were found,” including (Shoemaker’s emphasis) “a woman’s print beneath a window.”

Those who believe these incidents were real attacks have suggested that one individual was responsible for the gassings—and that the Mad Gasser was not a human but an extraterrestrial. Some of these believers say they do not know why an extraterrestrial would attack humans in this way, but others suggest that the extraterrestrial was performing some kind of experiment on the humans. (Supporters of this theory also believe in alien abductions, whereby aliens are said to hold humans captive in order to perform experiments on them.)

Skeptics, on the other hand, accept the official explanation: that the supposed gassings are examples of mass hysteria. This hysteria, they argue, caused fearful people to imagine that they smelled, felt, or saw things that were not really there.

What is Voodoo? Facts and Myths