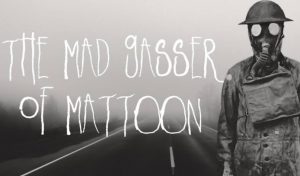 The Mad Gasser of Mattoon was the name given to the person or persons believed to be behind a series of apparent gas attacks that occurred in Botetourt County, Virginia, during the early 1930s, and in Mattoon, Illinois, during the mid-1940s.

The first reported gasser incident occurred at the home of Cal Huffman, in Haymakertown, Botetourt County, where there were three reported attacks over the course of a single night.

At about 10:00 pm on December 22, 1933, Mrs. Huffman reported smelling an unusual odor, and was overcome by a feeling of nausea. The odor and the nausea returned again at about 10:30pm, at which time Cal Huffman contacted the police.

A third attack occurred around 1:00 a.m., this time affecting the entire house; in total, eight members of the Huffman family were affected by the gas, along with Ashby Henderson, a guest staying at the house.

The next recorded incident occurred in Cloverdale on December 24. Clarence Hall, his wife, and their two children returned from a church service at about 9:00 p.m. They detected a strong, sweet odor and immediately began to feel weak and nauseated.

Police investigating the case discovered that a nail had been pulled from a rear window, near where the gas appeared to be the most concentrated, and presumed that the nail hole had been used to inject it into the house. 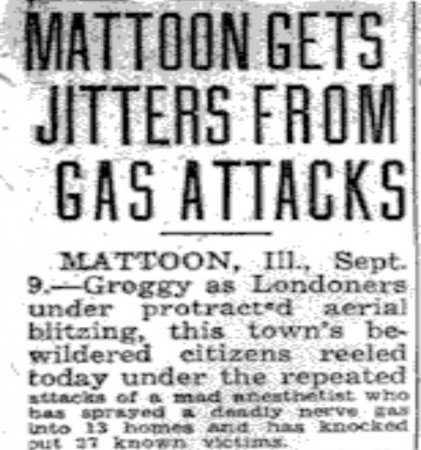 A third incident occurred on December 27, in which Troutville resident A. Kelly and his mother reported similar signs and symptoms to the Huffman and Hall cases.

A fourth and fifth incident occurred on January 10, when Mrs. Moore, a guest in home of Haymakertown resident Homer Hylton, reported hearing voices outside before gas was injected into the room through a damaged window. The second attack that night was reported in Troutville, at the home of G. Kinzie.

The police in Mattoon explained the cases as mad hysteria and claimed there wasn’t an actual “Mad Gasser” at all. Some believed that explanation while many many others did not. It’s still considered a mystery.