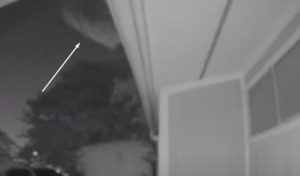 A strange flying object appeared in the sky over Texas. People are already building various theories about what they saw. They are sure that a UFO appeared in the sky. Something unidentified was filmed 10/21/2020 in Irving (Texas).

The video shows the territory of a private house and the house itself, which partially obscures the sky. The camera was able to capture a UFO that appeared momentarily. The object flew very low and at great speed.

The author of the video believes that the aliens are visiting our planet for a reason. Perhaps they are carrying out some kind of secret mission. In this case, the UFO was partially disguised.

The camouflage of the UFO turned out to be not entirely effective: some citizens claim that they personally observed the mysterious object passing by.

UFOs could be observed from different localities. Some eyewitnesses were in Dallas, while others were in Portland. The speed of movement was so high that people could not see anything in detail. Moving from one point on the horizon to the opposite took a few seconds.

“I might have seen that ship or at least one like it fly over on one of these October nights over here in Dallas. I’m glad to see it was recorded; this confirms to me what I’ve seen”, wrote Pablo Amezquita.