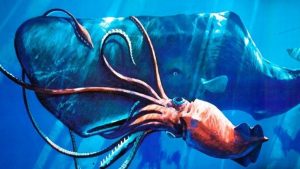 In the Gulf of Mexico, at a distance of only 100 miles from New Orleans, a research submarine camera captured a giant squid, which was about 3-3.7 meters long (see video below).

Moreover, according to scientists, it was still a very young individual, who still grow and grow. Adult giant squids can reach a length of 8 meters.

For hundreds of years, similar ocean monsters have inspired sailors to tell stories about monsters with tentacles capable of sinking ships.

A recent video from the Gulf of Mexico, dated June 19, 2019, shows that these monstrous squid are found on the shores of the United States. Squid was filmed by the research group Ocean Research & Conservation Association (ORCA).

“When we noticed something in the corner of the screen, the rest of the team immediately gathered around us and we immediately realized that it was a squid. It was so big, but because of the focus of the shooting, it was difficult to say how big it was. But not less than 3 meters, and maybe 3.7 meters”, said scientists Edie Widder and Sonke Johnson.