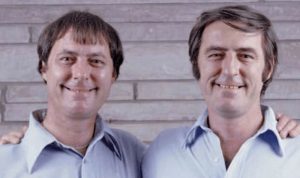 Lewis and Springer – both adopted separately as babies, but shared amazing similarities.

Lewis and Springer first met on February 9, 1979 when they were thirty-years-old. Both were very nervous, but they considered the reunion one of the most important days of their lives. The twins found astonishing similarities in their behavior and lives.

Lewis was responsible for the reunion. Both twins were told they had a twin brother. Springer’s mother told him his twin died. Lewis went to the courthouse and found Springer’s name. He called Springer and they arranged to meet.

The twins were asked to take part in a study of reunited twins. The Jims were the first in a series of 398 twin’s parallels which would be tested during research into the influence of heredity and environment on human behavior. The parallels and short acquaintance made the twins perfect candidates for behavioral research.

Dr. Thomas Bouchard was the director of the Minnesota Center for Twin and Adoption Research that studied the twins’ personalities and attitudes.

– Both twins had been adopted by different Ohio families and grew up within 45 miles of each other.

– Both had high blood pressure, suffered from what they thought were heart attacks, had vasectomies and migraine headaches and used the same words when describing them.

– Both chain-smoked Salems, liked beer, had woodworking workshops in their garage, both drove a Chevrolet, both served as sheriff’s deputies and both chewed their nails.

– They had vacationed on the same beach in the Florida Gulf Coast and lived in the only house on their block.

– Their personality variables included conformity, tolerance, and flexibility. Their scores were so close that they approximated the average of totals of the same person taking the test twice.

Were Twin’s Similarities Due to Heredity?

Studying twins separated at birth is a unique way to study the nature versus nurture theory in terms of personal development.

The study finds that similarities seem to have a genetic base. One of the eleven traits, traditionalism, respect for authority, standards, rules and morals, was discovered to be sixty percent inherited.

Other traits with more than fifty percent were vulnerability, dedication to hard work and achievement and the ability to being caught up in imaginative experiences.

Although the center’s findings were about fifty percent. Bouchard cautioned that the numbers might not be totally accurate.

Parapsychologists have maintained that telepathy operates best between people who have a strong emotional link. This level of the human mind seems to function better spontaneously, especially during a crisis situation.

Psi, psychic phenomena, researchers have been aware that twins show an extraordinarily strong telepathic link. A series of tests conducted by Canada’s University of Alberta psychologists the confirmed this theory by establishing statistical evidence that identical twins, and to a smaller extent, fraternal ones, have a significant ability to communicate telepathically.

Research into the nature of telepathy involving separated twins, continues in laboratories.

Telepathy is often thought of as mind-reading. Parapsychologists commented that examples of telepathy in a laboratory seldom involve the actual perception of another’s thoughts.

Sometimes the information that the percipient receives from the sender seems to have been another form of Psi, due to much overlap in psychic abilities.

Most likely, the bond between identical twins is influenced by both factors.