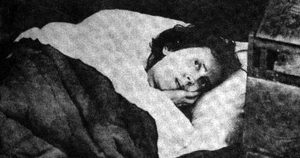 Karolina Olsson was born in Oknö near Mönsterås, Sweden, on the 29 October 1861, the second-eldest of five children, her siblings were all brothers.

Karolina became known as “the Sleeping Beauty of Oknö”, having purportedly remained in a state of sleep for 32 years, from 1876 and 1908, from the age of 14 to the age of 46. This is believed to be the longest time that anyone has lived in this manner who then awoke without any residual symptoms.

However, it has been also been claimed that Olsson may not really have been asleep all that time, as there were many unexplained characteristics of her state, for example, her hair, fingernails, and toenails did not seem to grow, and their were rumours that her parents hid her away following talk of witchcraft.

The story begins on the 18th February 1876 when she was returning home to her village crossing the ice of a frozen river when she fell. Some say she fell through the ice, nearly drowning but being pulled to safety at the last moment, although other sources claim she tripped and hit her head, knocking a tooth, resulting in a tooth ache.

Whatever the truth she did make it home safely but with a sore face and toothache. When the toothache got worse her father, a local fisherman, and her mother thought it was down to witchcraft.

Knowing there was nothing they could do that evening Karolina was told to go to bed and see how she felt the following day. However, Karolina went to sleep that night aged 14 and she wasnt to wake up again until 1908 when she was 46, having slept for 32 years.

Her father was a fisherman and unable to afford a doctor, and the family relied instead on the advice of friends and the town midwife. Eventually neighbours paid for a visit from a doctor, who was unable to wake the sleeping girl and determined that she was in a coma.

This doctor continued to visit her for a year, after which he wrote to the editor of Scandinavia’s leading medical journal, soliciting the help of other doctors in finding a cure for Karolina’s continuous sleep-state.

Karolina was visited by several doctors all who could not definitively explain her state of torpor and all attempts at rousing her failed, and they noted that her hair, fingernails, and toenails did not seem to grow.

Pins were inserted into her fingertips for a response but without any effect. Later in 1892, when she had been asleep for 14 years she was put in a hospital for a month where more attempts at waking her took place. Even electricity was used, passing a current through her body, but again without any success.

She was returned back home and as she slept life passed her by. Her mother passed away in 1904 and later two of her brothers. After the death of her mother the family took on a housekeeper to look after the families home and Karolina.

Upon the death of her brother in 1907, Karolina is said to have began crying hysterically, although she remained asleep. Everyday Karolina was fed two glasses of sweetened milk by having it spooned into her mouth, luckily her swallowing reflex was intact or she will have likely wasted away.

Several times she was seen to sleep walk or crawl. Her father had also witnessed her in a kneeling, praying position next to her bed saying a few mumbled words before returning to her bed.

When Karolina eventually woke up, she found that her world had totally changed. She must have known something was wrong as the first anyone saw of her she was inconsolable, perhaps having looked into the mirror and seeing that she was now a middle aged woman.

Astonishingly though, although she was now firmly in her middle aged years she only looked to be in her mid 20’s, her prolonged slumber having preserved her youthful beauty. When her surviving brothers arrived, however, she did not recognise them.

When word got around that this ‘sleeping beauty’ had awakened, people travelled from far and wide to visit. She was a instant celebrity. Newspaper reporters from all over Europe, England, and the United States travelled to Oknö to interview her, and she and the family went into hiding to avoid the attention.

She later submitted to psychiatric testing in Stockholm and was found to be in full possession of the faculties that she had possessed before she fell asleep. At 46 years old, they described her as appearing to be no older than 25.

Her mental acuity was still that of a young woman, intelligent but, obviously, knew little of the history of her country… understandable as she had slept through it, but no lasting physical damaged found.

However not all was good and well. Many thought Karolina was a fraud and that the 32 years of sleep had been staged, helped along by the family. No-one believed she could have been kept alive on just milk and sugar.

Many believed it was possible for her protection, her mother having strongly believed her daughter had been bewitched all the way back in 1876.
Karolina lived out a quite happy life afterwards and passed away on April 5th 1950 aged 88 from an intracranial haemorrhage.

It is still not entirely known why she had slept for so long and as such is still regarded as a medical marvel.