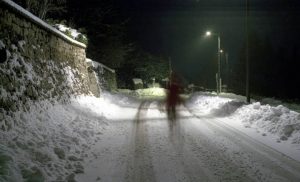 If you do not think it is scary enough to drive a car along a dark and quiet country road on your own, just imagine encountering a phantom auto or having an ephemeral being step out in front of you.

Haunted roadways are located all over the world, from the misty roads of Scotland and the busiest roads in Hong Kong to lonely roads in the United States. If you’d rather stay away from the supernatural happenings reported on these roads, you may just want to find another way home.

This tunnel forms part of the A2 motorway from Basel to Chiasso. Though the first known Belchen ghost was male, it is a woman that made an appearance in January 1981 that made headlines. This woman, who has been noticed waiting outside of the tunnel, wears white clothing. Drivers say that she steps out in front of vehicles and sometimes even speaks to them.

The section of road between Uniondale and Willowmore is known for the Uniondale Phantom Hitchhiker, a ghost known as Marie Charlotte Roux. The girl was killed in a car crash on the road in 1968, and she was first reported as a hitchhiker on Good Friday in 1976, when she caught a ride and then mysteriously disappeared from the backseat. She appeared two years later (again on Good Friday) and caught a ride with a motorcyclist, who also reported that she disappeared after only a couple miles. The phantom has made other appearances on Good Friday since then as well.

This road is said to be haunted by a woman in a white or blue dress. Though everyone can agree that a woman named Annie was killed on the road, versions of the story take multiple turns from there. Some say that Annie was killed on her wedding day night; others say she was decapitated on her prom night and dragged along the road. Drivers say that when they pass by Annie’s Road at midnight they see her ghost walking along the road, and she apparently appears on the anniversary of her death every year as well.

Based to the stories, a troop of boy scouts in the late 1950s or early 1960s were on an overnight expedition in order to earn merit badges. As they slept around the campfire, either their scout master or the bus driver (depending on the story) killed each and every one of the boys. A second variation on the story says that one of the boys accidently dropped a lantern that night and a forest fire engulfed the entire troop. There are no actual records of any of these events on Boy Scout Lane, but there have been many stories about paranormal activity and sightings in the area anyway.

Nicknamed “the ghost road,” this road in southwest Scotland has been the site of hundreds of unexplained sightings. Drivers have reported seeing a couple walking in front of their vehicles, birds flying into their windshields and then disappearing, apparitions of people walking toward vehicles and other ghostly creatures (including goats, wild dogs and cats) appearing out of nowhere.

The M6 in England has been in existence in some form or fashion for about 2,000 years, so it’s no wonder that more than a few spooky legends have been linked to it over time. The road was once used by soldiers during the Roman occupation of England, and Roman soldiers have been seen along the road and walking through traffic. There is also a phantom truck that drives against the flow of traffic as well as a ghostly woman who has been seen hitchhiking along the side of the road.

The A229 from Kent to Sussex has two well-known spectres haunting it. The first is believed to be a woman named Judith Langham, who was killed on the road on her wedding day in 1965. She appears on the road in her white dress, and just as people stop their cars to avoid hitting her, she disappears. The second ghost is a hitchhiker who gets into the cars and talks about all the things that have gone wrong with the world and how he’ll make them better. Once drivers reach a certain spot on the road, however, he simply disappears.

Bloodspoint Road is just one of several intersecting roads throughout Boone County, Illinois, that can raise the hair on the back of your neck. These roads have been witness to murders, suicides, hangings and even a child that was hit by a train. Several children died when a bus rolled off a bridge in this area. There’s also said to be a witch who hanged her children in an old farmhouse, and though the building no longer exists, several people say they’ve seen it through the trees. People who have driven this road say they’ve seen children along the sides, hand marks on cars and lights in the trees.

Considered one of the deadliest roads in the world, Tuen Mun Road has seen countless fatalities over the years. The road is also the most important and one of the most used roads in Hong Kong, so it’s nearly impossible to avoid. Tuen Mun Road is a catch-22 of haunting: Ghosts of those who have been killed on the road are said to step into traffic, causing motorists to swerve out of the way and get into serious or fatal accidents themselves. These new victims then return as ghosts to cause even more accidents on the road.