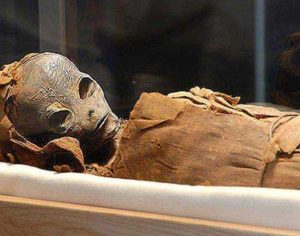 According to latest news reports there has been a resurfacing of an artifact found by a Czechoslovakian archaeologist and retired professor of the University of Pennsylvania named Viktor Lubek.

The finding was made in September of 2012 while investigating recently found rooms within the great pyramid.

The artifact itself seems to be a well preserved humanoid being being called an alien by some. The being was carefully wrapped and buried with several strange artifacts before being inclosed in a crystalline case within the pyramid. It’s revealed that the tomb of the being was inscribed with information that he was an adviser to the Pharoh and a being of great importance by the name of Osirunet (meaning star or sent from heaven).

The story regarding the creature came out through an Arabic political magazine by the name of Rose al-Yusef in 2000 and has been a subject of great interest for many years since.

Sadly, upon looking for both Lubek and de Braga it appears that there’s no record of either man in Spanish journals or in the University of Pennsylvania records. There were some who believe that the image has been photohopped.

However ,there is a much more mundane reason for the appearance of these small mummies (there were 2 of them found in all). Much as the custom of the time the small mummies were not exactly extra terrestrial but rather stillborn babies or children who died at a young age, as described by Dr Zahi Hawase the famed curator of the many collections of Egyptian antiquities.