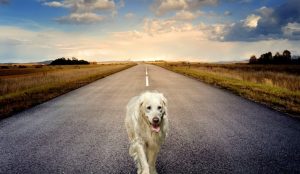 His family, the Braziers, were restaurant owners who were vacationing in a small Indiana town, far from their Silverton, Oregon home. They became separated. The family had to return home, leaving Bobbie in Indiana.

So, Bobbie traveled, alone, westward to reunite with his family. At first, he was trying to find his bearings, wandering in circles, as people do when they are lost, traveling miles, but only about a couple of hundred of them in the right direction. In late fall, he began to find the journey toward home.

He trekked through Illinois and Iowa. Sometimes, he caught his own dinner. Other times, people fed him and gave him shelter for a night or longer.

Hoboes shared their food with him. During Thanksgiving, a family took him in for several weeks. Then, it was time for him to move on.

He lost a lot of weight during his journey. He swam across rivers, including the Missouri, filled with ice. He crossed the Rocky Mountains.

Finally, in February, he reached home and entered the family restaurant. He went to the second floor living quarters where Frank Brazier was sleeping, jumped on the bed and licked Frank’s face. This ended the 3,000 mile six month long journey.

The president of the Oregon Humane Society authenticated this amazing feat. The route was reconstructed and people who saw or took care of Bobbie were interviewed.

Bobbie did not follow Frank’s east/west route and appeared to have traveled thousands of miles over land he had never been in, land he had not seen, smelled or, in any way was familiar, yet, he found his way home.

Joseph Banks Rhine, one of the fathers of modern parapsychology, and his daughter, Sara Feather, have studied many similar cases. Rhine called this phenomena psi-trailing. Psi is the abbreviation for psychic phenomena.

In 1952, he investigated a case of psi-trailing that happened in 1952. This was one of the longest journeys of a cat.

Stacy Woods was an Anderson, California school principal. Sugar was the family cat.

The family moved to a farm in Gage, Oklahoma and left the cat with neighbors because the cat was terrified of riding in cars.

About fourteen months later, Stacy and his wife were milking cows in the barn when a cat jumped through an open window and landed on Mrs. Woods’ shoulder. The cat looked and acted so much like Sugar that they joked their cat had found them. Then, they realized that the cat really was Sugar. The cat had an unusual bone deformity at his left hip joint.

Later, the Woods found out that Sugar disappeared three weeks after they moved.

Rhine learned that Sugar was a strong cat and an excellent hunter and had caught half-grown jack rabbits. The parapsychologist concluded that the cat was physically able to travel the rugged land between California and Oregon, a distance of 1500 miles.

The question was how did Sugar find his family in a place he had never been to?

Another unusual case that Rhine and Feather studied was one of a pigeon. This was not the case of the usual homing pigeon.

Hugh Brady Perkins was a boy when he discovered the pigeon in the yard of his home in Summersville, West Virginia. The year was 1940. He tamed the pigeon and placed a band on its leg with the number 167 on it.

That winter, Hugh was taken to a hospital, at night, for surgery. The distance was about 120 miles from home.

One night when it snowed, Hugh heard fluttering at the hospital window and told the nurse. She opened the window to humor the boy and the pigeon came in. There was the band with the number 167 on the bird’s leg.

How can animals travel such distances and, to places they have never been?

When cases are evaluated for psi-trailing, there are four major criteria that are used.

1) The reliability of the witnesses. 2) Positive identification of the animal, such as a deformity, scar or name tag. 3) How credible and consistent the details are. 4) Adequate corroborative evidence, such as other witnesses.

After years of study, Rhine and Feather found at least 54 cases of cats, dogs and birds that appeared to meet these criteria.

The evidence is there. Again, the question is how animals can do this.

I believe it is by telepathy. This is communication without the use of the traditional five senses, across space and time. This has been demonstrated in humans many times, both in experimental situations and in the field. A simple example is that a person is thinking about calling a friend. The phone rings and it is the friend.

Dr. Karlis Osis, a distinguished parapsychologist, did one of the earliest experiments in psychic communication with animals in the early 1950s at the Parapsychology Laboratory at Duke University.

Osis was experimenting with kittens in a T-shaped maze, trying to influence them to go right or left, according to a random sequence.

The cats made more turns, according to Osis’ will, than could be attributed to chance. He concluded that telepathy was probably the best explanation.

Even more intriguing was the fact that the cats that he had a special bond with were the ones that most often went in the direction he chose. The cat that “scored” the best was one that he allowed to jump on his shoulder and ride around the laboratory.

Transpersonal psychology studies human consciousness. There is also research being done in both animal consciousness and psychic animal-human communication. I believe that this, not space, is the last frontier.

Can’t Recall Your Dreams? What It Means And What To Do About It