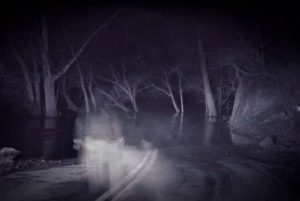 Parapsychologists have classified different types of apparitions based on documented witnesses’ accounts. Experiences with these entities support survival theory.

The most popular collective generic term for parapsychological phenomena is “ghosts.” Scientific investigators of “ghostly” occurrences have found activity can be attributed to one of the following phenomena.

Poltergeists are created by psychokinesis (PK), the ability of the mind to influence matter. The most common phenomena are rappings and other sounds, objects moving and electronics and electrical equipment being affected. There can be fires, water appearing or writings on walls, but these activities are rare. The agent can be a human or an entity.

Hauntings can be seen, heard, felt by touch, smelled, tasted and sensed. There is no intelligence. This is theorized to be energy imprinted on time and space.

The difference between hauntings and apparitions is that the latter have intelligence. According to survival theory, these are that part of the human which survives the death of the physical body. They can appear to experients while they are awake, sleep or in an altered state of consciousness.

The Dead: Usually they appear to someone who was close to them in life and try to communicate information or comfort in times of grief or sadness. James L. Chaffin in the Chaffin Will Case: Apparition’s Appearance Prevented North … appeared to his son to tell him where his new will was.

Crisis: Their purpose is to convey that fact that they are in severe trauma. Most are dying or have just died. Admiral’s Ghost Tells his Death is an example of this. Vice Admiral George Tyron visited his wife’s tea party in London while he was dying or had died in a shipwreck off of the coast of Syria.

Collective: These are seen by more than one person, as in the case of Admiral Tyron. Sometimes apparitions can be animals. Three women saw Fluffy, a cat’s apparition rush into the room. Kitty, the living cat, wasn’t in the house at the time, but when he came inside and was put into the kitchen, he immediately reacted to Fluffy’s presence. Animal Psychic Phenomena describes the incident.

Deathbed: When some are dying, they see loved ones, angels or holy beings shortly before the moment of death. A man was dying and, several hours before he did, saw his Uncle Charlie and spoke with him until he died. This has also been reported in NDEs, near death experiences.

Reciprocal: These are apparitions of the living when both the experient and agent are aware of each other. The agent feels transported to where the percipient is. This may be experienced by more than one observer. Mrs. Wilmot was the agent in An Apparition of the Living.

Survival: What the experient witnessed was a spirit of the dead with intelligence.

Misperception: The experience was due to mistakenly experiencing that which are distortions caused by the physical environment, such as dim light, or by emotional influences.

Hallucinations: These are defined as perceiving something without a stimulus. It is one of the criteria for schizophrenia, although it can happen in other psychiatric disorders. There are physical conditions and substances that can induce hallucinations.

When investigating cases of alleged apparitions, it’s of utmost importance to take all theories into consideration, not to discount the possibility of a hoax or fraud and that accounts are mostly subjective.