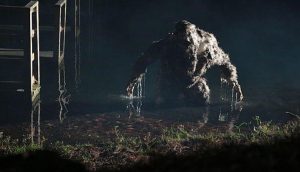 Witnesses have described the hairy biped as having glowing orange eyes, a round head and hands with three fingers. It leaves three-toed footprints behind. Some say Momo looks like a Bigfoot-werewolf hybrid.

This hominid is said to be six to eight feet tall and weighs between four and six hundred pounds. It emits a foul overpowering stench and screams like a puma.

Missouri Monster, abbreviated as Momo, has killed dogs and other animals, unlike the vegetarian Bigfoot. Cryptozoologists and UFOlogists investigated the creature.

During the early 1940s, people heard eerie screams emanating from the Missouri woods, but found no source. In 1969, there was a sighting of a small hairy ape-like animal. In 1971, Joan Mills and Mary Ryan sighted the monster they said looked like a half man and half ape when they were driving on Highway 79. There was a spate of sightings in 1972.

June 30 – Vaughn and Tim (last names not given) were fishing in the Cuivre River when they saw a tall hairy creature wading in the water. When they investigated, they found large three-toed footprints where the hairy biped exited from the river.

July 11 – Terry and Wally Harrison were playing in their backyard when sister Doris heard them scream. They all saw a tall black hairy biped carrying a dead dog. Earlier that day, a farmer reported his dog missing.

July 14 – Edgar Harrison, their father, and several other people heard growls and investigated. The saw nothing, but reported an unpleasant odor that smelled like rotten flesh.

July 21 – Ellis Minor heard his dogs barking and grabbed his flashlight before going outside. He saw the tall black hairy monster in the flashlight’s beam. The creature ran away when it noticed him.

July 23 – Police sealed off a two acre wooded area and twenty-five people searched for the beast, which many believed was a black bear, because there were reports of seeing an animal with a sheep or dog in its mouth.

July 24– Two teenage girls reported seeing the hairy creature at sunset when it was walking by the edge of a wooded area.

Momo mania triggered a frenzy of investigators and the curious. Bigfoot investigators, UFOlogists and media reporters from across the United States flocked to the area. Hayden Hewes was one. He founded Sasquatch Investigations of Mid America, SIMA, as a part of the International UFO Bureau which he also established.

SIMA researches Bigfoot sightings in an attempt to determine if there’s any connection with UFO sightings. Hewes found the witnesses he interviewed to be credible, declared that Momo was not a hoax and that there was no correlation with UFOs.

John Schuessler helped establish the Mutual UFO Network, MUFON, an international group of UFO researchers. He had discovered that Momo sightings coincided with a rash of UFO ones, so he joined the investigators. His findings were the same as Hewes’.

The cryptid is classified as a hominid – a human-like creature. Momo left no hair or scat samples and hasn’t been photographed. Hairy bipeds are universal, having been sighted on all continents except Antarctica.

Descriptions are basically the same, but have variations according to the locality. They have different names including Sasquatch, Bigfoot, Yeti, Almas and Yowie. It’s theorized that they are a related species of an unknown animal for those who believe they could exist.

The Man of the Sea: The Caspian Merman