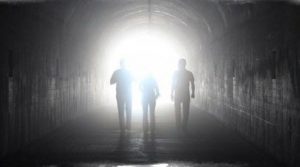 The Society for Psychical Research, SPR, investigated the Palm Sunday Case for over thirty years. Founded in 1882, the organization is the oldest parapsychological one in the world. Its purpose was investigating controversial phenomena, termed mesmerizing, psychical and spiritualistic, in a meticulous unbiased scientific manner.

Its founders were highly respected intellectuals – Henry Sidgwick, Edmund Gurney and Frederick W. H. Meyers, all Fellows of the Trinity College of Cambridge. They researched mental mediumship, complex, ideal and simple cross correspondence and automatic writing, which are done in an altered state of consciousness, ASC, commonly referred to as a trance.

Complex cross correspondence is when messages are indirect and must be interpreted; ideal involves incomplete messages that have to be pieced together. Simple correspondence is when two or more mediums produce associated identical words, phrases or like phrases. The case was named for the date of death of one of the spirit communicators, May Lyttleton.

Myers, Gurney and Sidgwick were interested in investigating human survival after the body’s death. Myers believed that the dead would know what represented credible evidence of survival and how the living might find it.

He also believed that providing this evidence required contact with a group of several spirits, not just one. Initial communications with the dead were made prior to Myers’ 1901 death.

The first messages were simple, showing likenesses with words spoken by mediums in trances and in automatic writings. Sittings were held at the same time, with the mediums being in separate locations.

After Myers’ death, communications were more frequent and in the forms of ideal and complex cross correspondences. During the next thirty years, the messages appeared to show there was intelligence behind fragments and symbolism.

These communications, unintelligible to individual mediums, made sense after they were compared and analyzed. Clues to connect messages were found in events that happened when the entities lived, their interests then, literature and poetry.

Sometimes, it took years to make sense of the communications. The researchers and mediums who worked through the SPR concluded that the cross correspondences formed a large, linked network in approximately 3,000 gathered scripts.

May Lyttleton was an energetic, beautiful young woman when she met Arthur James Balfour in 1870. In 1875, Balfour told her he was going to propose marriage.

She contracted typhus fever and died on March 21, 1875, Palm Sunday. The researchers believed the analyzed messages were made by a group of entities, but were stymied by not knowing their purpose or meanings.

Their research indicated that the purpose of earlier communications was to inform them that May’s, Myer’s and Francis Balfour’s spirits, one of Arthur’s brothers who was killed in 1882, survived death of the physical body. Other spirit communicators, purportedly, included Sidgwick and Gurney. The researchers concluded the messages were meant for Arthur Balfour.

Winifred Willett was one of the mediums. May began to communicate only through her. It was apparent that May wanted to tell Arthur she loved him. Initially he refused to believe that she was trying to contact him. He finally accepted this and attended sittings.

In 1926, Balfour contracted pneumonia; his health declined. During one sitting, he saw an apparition of a young woman. She communicated to him that he was never alone. Her spirit was always with him. He died on March 19, 1930, which closed the investigation.

It was made public in 1960, after all involved had died, when Jean Balfour wrote about it in Proceedings of the Psychical Research Society, the SPR’s journal.

Interest waned in mediums and cross correspondences by the late 1930’s; however, channeling replaced it in the 1970s as part of the New Age movement. Channeling is done while people are in an ASC. Channelers receive information through visions, clairaudience (psychic hearing), inspiration and intuition.

Some channelers allow the entity to take control and speak through them. Others, like some mediums, employ automatic writing. Mediums focus on communication with spirits of the dead as proof of survival after death. The focus of channeling is receiving information from highly evolved entities or the Higher Self.

There are various theories about mediumship and channeling. Some researchers believe that the communication is what it purports to be – messages from the dead or a higher entity.

There are psychical researchers who postulate that the information comes from the mediums’ unconsciousness, from each other or other people via telepathy. There is a theory that people have multiple levels of consciousness and that some people can tap into this.

The communications in the Eileen Garret’s R101 séances and Lurancy/Mary’s incidents have been verified which indicate that it’s possible to communicate with the dead. The communications appear to reveal messages from a network of entities giving information in order for May to contact Arthur in the Palm Sunday Case.

More research is needed to scientifically explain communication with the dead.