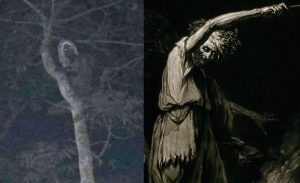 In the fall of 2021, during an evening walk with her dog, an elderly English woman photographed some kind of creature in a tree.

When about 300 meters remained to the meeting point with the mysterious being, her pet whined, trembled and refused to move on. But the woman took the dog in her arms and continued on her way.

At some point, the behavior of the animal got out of control. It broke free and ran away. At that moment, the woman heard a strange low hiss from above and looked up at the nearby trees. Some kind of creature was sitting in the crown of one of them.

Numb with fear, the woman pointed her phone at entity and took a picture. After that, creature, jumping from tree to tree, quickly disappeared from sight. When the next day the woman told her neighbors and relatives about the incident, they did not believe her, but when they saw the photo, all the doubts of the skeptical people disappeared.

Then she was prompted to seek help from MUFON. This organization specializes in psychological assistance to residents of England affected by ghosts, poltergeists and aliens. In addition, various cases of manifestation of the unknown are being investigated.

The experts of the organization took up this matter with surprise. According to the woman, the details of the incident were recorded. Here is how the creature was described by a resident of Manchester:

“It was a nice autumn evening for a walk. The clock showed around 21:40 when the meeting took place. Musi (the name of the dog) was very frightened of something, but I took him in my arms, and we continued our walk. At some point, he became uncontrollable and, breaking out of my arms, rushed back towards the house. Then I heard a hiss.

“My first thought was a giant snake, but where in Manchester would it come from? And when I looked at the crown of the tree and saw pale eyes without pupils, I became incredibly scared myself. 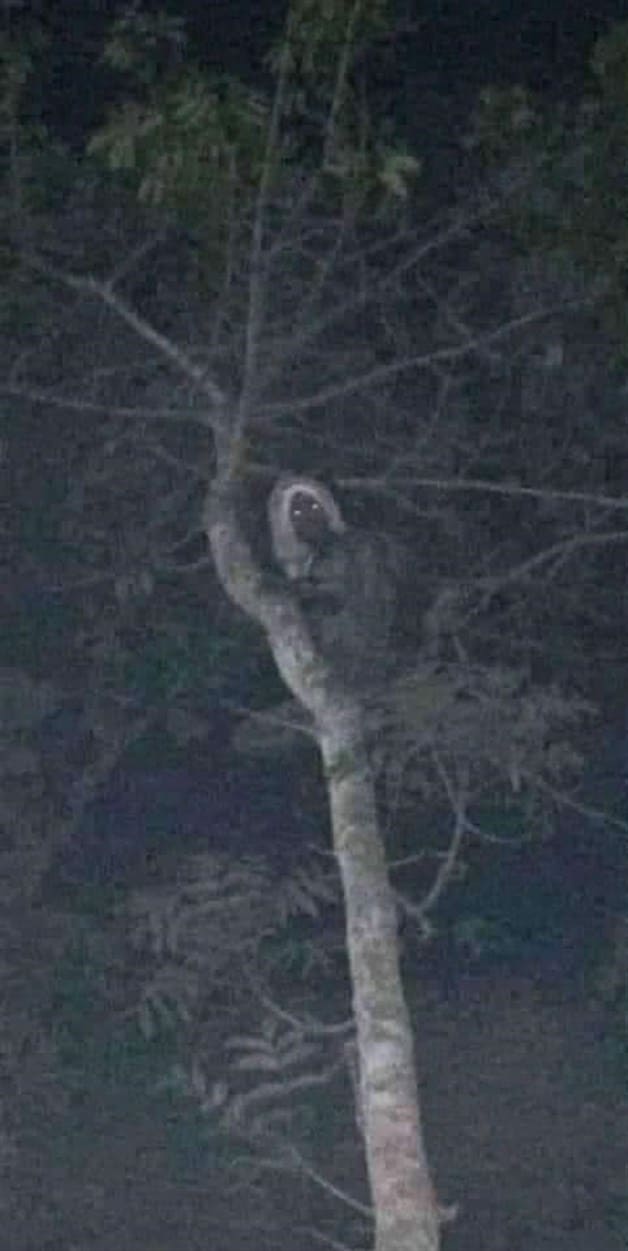 “In a state of stupor, I automatically took out my phone and took a picture of this terrible creature. Then it darted away in quick leaps from tree to tree. It seemed to me that his coat is absolutely black, except for the one on his head, it is white.

“But I paid attention only to the eyes – they had no pupils. It was like two flashlights were drilling right through me.”

“Maybe it seemed to me, but on the front paws of this animal I saw long rounded claws, and it also did not have a tail. I think so, but I was in shock and maybe mixed up something.”

Two days later, the woman took two researchers to the park, who carefully examined the place of the mysterious meeting.

There were fairly deep claw marks on the bark of the tree. Probably that creature left them.

Variants with a cat or a monkey running away from someone were immediately excluded. They don’t have those claws. Who was the creature that made the Englishwoman so frightened is unknown.

Folklorists believe that this may have been a form of bruja witch. This cryptid is a flying creature that inhabits not only England, but also Wales, Mexico, USA, Canada, Scotland, Northern Ireland, Puerto Rico and Ireland.

Experts are still arguing whether the brujah witch is the famous Flatwood monster or not. And if so, can it be argued that it was this creature that the Englishwoman captured in the photograph?

After the incident, a survey was conducted among local residents, has anyone else seen something like this? It turned out that a gentleman who was sitting on a bench in a nearby street noticed the rapidly fleeing creature that evening.

But even taking into account his testimony, there is very little information about the creature, so it is extremely difficult to find out its nature of origin.

In addition to the assumption of a brujah witch, there is a version that this is some kind of mutant from the famous sewer network near Manchester, about which there are a variety of legends and rumors.

And there is an opinion that the Englishwoman captured a real alien. However, it is impossible to say anything with certainty in this case.