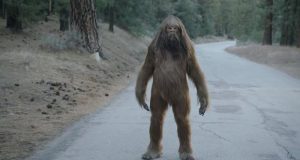 In British Columbia, the most frequent Sasquatch sightings are near Port Douglas on Harrison Lake and on the Harrison River in Morris Valley and in the Chehalis area.

According to legend, the Sasquatch is an enemy of the Chehalis Indians. There have also been sightings at Pitt Lake and it is believed the valley leading through Stave Lake and to Harrison Lake is a migration route for Sasquatch.

According to documentation, the Sasquatch or Bigfoot is a wild man who stands 7 to 14 feet tall and weighs 300 to 400 pounds. He has hair all over his body, except for the pads of his feet, the hands and the face.

The hair color can range from black, red, brown or white. The face looks like a cross between a human and ape. A Bigfoot’s nose is flat and its ears are hidden by long hair. They have long legs and walk upright like a human.

Sasquatch or Bigfoot seems to roam dense forests away from civilization. They are said to make beds out of tree boughs and give off a warning sound similar to that of a monkey but much louder. It is also reported that they have a distinct smell which has been described as rotten eggs, sulphur, or rotten meat.

In 1965, two loggers saw Bigfoot tracks and realized they were being watched and managed to make sketches of him before he ran off. Bigfoot harassed loggers in the 1960s at Frenchman’s Bay at the north end of Pitt Lake.

At the Wild Duck Inn at Port Coquitlam British Columbia in 1970, nine loggers reported their logging equipment was found turned over. In 1972, loggers again at the Wild Duck Inn talked about having their cook house pounded with large boulders.

In 2001, on a logging road in the Boise Valley leading to Pitt Lake, a man and his wife and two dogs heard a weird noise coming from the opposite side of the road. This noise sounded like two large rocks being hit together.

The strange thing was that the sound repeated itself every five to 10 seconds for at least a 10-minute time period. During this time, the dogs had put their tails between their legs and really didn’t want to go find out what was making the noise.

The man and wife stood up and shouted into the bush to see if someone was there. The hairs on their heads stood up and they both felt a very strong desire to leave.

Another account was from two men who were hiking in Spindle Canyon in search of Slumach’s lost gold mine. The men had set up camp for the night and when they were just starting to fall asleep, they heard a blood-curdling scream and then a series of low garbled noises.

They could also smell a foul odor that resembled rotten eggs or rotting meat. At daybreak, they hiked further in the canyon and saw a Sasquatch crouched over a creek catching fish. The Sasquatch turned around and looked at the men then ran into the bush.

A logger who resided at Pitt Lake said he was heading up the lake on his boat early in the morning. Although the waters were calm, he glanced towards the shoreline and saw a series of splashes.

The man headed toward shore to see if someone was in trouble. As he neared the shore, he saw a tree laying in the water and an ape-like man jumping up and down on the tree. As soon as the logger was spied, the ape-man quickly headed into the bush.

On another occasion, a logger was cutting wood outside of his cabin. His dog began to bark, growl and make crazy movements. The logger looked towards the bush to the location where the dog was staring and saw an 8-foot creature standing on its hind legs.

This creature gave out a loud roar that did not resemble any animal noises heard by this experienced bushman.

Based on accounts of Sasquatch and Bigfoot sightings, there seems to be similar reports of their hairy appearance, unique smell and warning scream. There have been footprints found that don’t resemble any other animal in the forest but they are all similar in description.

On the other hand, there has never been a Sasquatch or Bigfoot captured or killed.

Although Sasquatch and Bigfoot sightings continue to pour in from the Pitt Lake area, this mystery has not yet been solved.