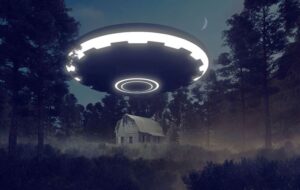 Rep. Tim Burchett (R-Tenn.) says he doesn’t trust the Department of Defense after the latest secret briefings on UFOs.

He believes the Pentagon knows more than what they’re saying following the latest secret briefings on UFOs.

“There’s an arrogance in government at that level that we cannot handle what’s going on out there,” Burchett said Monday as a guest of News Nation’s “On Balance with Leland Vittert.”

“It’s a bogus cover-up. It doesn’t fit and it’s about power and control,” he continued.

Burchett has joined lawmakers on both sides of the aisle seeking to apply pressure on members of the Senate Intelligence and Armed Services committees after disappointment in their latest data collection efforts.

“I don’t trust the Department of Defense to get this right since leadership there has always been part of a cover-up,” Burchett said.

“It is clear from the public evidence that we don’t have full control of our airspace. That’s a national security issue and it’s also unacceptable,” he added.

Scientists figured out when the Antikythera mechanism started working