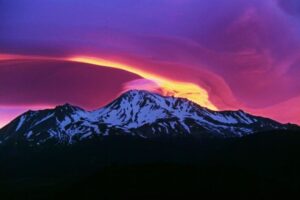 However, Mount Shasta is more than just a mountain. The name of Mount Shasta itself is shrouded in mystery. Some believe it is named after a local Native American tribe.

Some believe it is a variation of the French word chaste, meaning “pure.” Others have pointed out that Shasta is Sanskrit for “One who lives according to divine law.” Whatever its name, Mount Shasta has been the location of many strange and miraculous events.

Since before the 19th century, there have been persistent rumors that a strange race of beings reside in the vicinity of—or deep inside—Mount Shasta. Some believe they are extraterrestrials.

Others speculate that they are the surviving remnants of the once great civilization of Lemuria. These accounts have survived for over a century, and have been kept alive by such authors as Billie Hershberger, Wishar Cerve and others.

In 1925 the Rosicrucian William Spencer Lewis published an article ‘Descendants of Lemuria: A Description of an Ancient Cult in California’ under the pseudonym ‘Selvius.’ 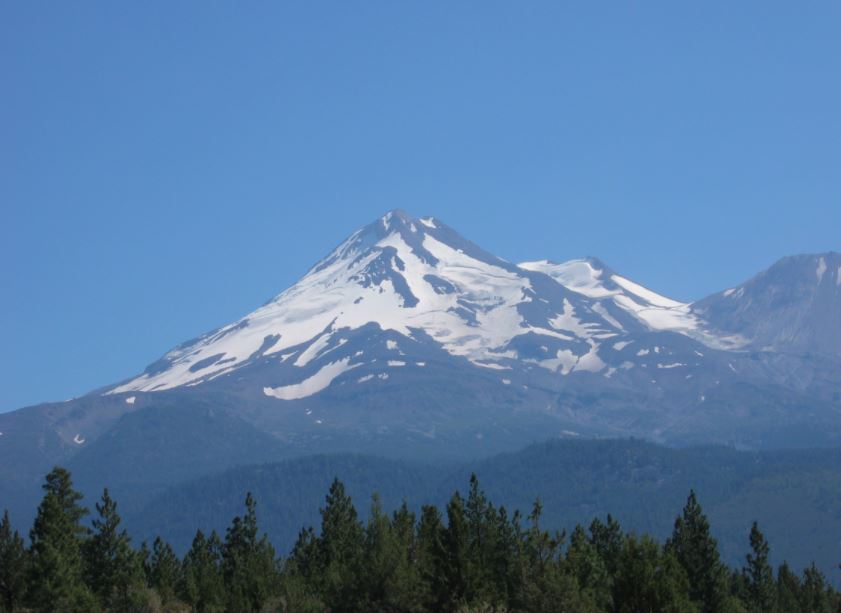 Lewis claims that Mount Shasta is the home of the last descendants of the ancient Lemurians, whose village is ‘nestled at the foot of a partially extinct volcano.’ The village is secluded and protected by an invisible boundary so that only four or five strangers have ever set foot there.

Lewis claims that the number of strange experiences reported by visitors to the area is sure evidence of the presence of some mystical force. In particular, he claims that Professor Edgar Lucin Larkin, director of the Mount Lowe Observatory, had seen the temple of the mystic village while examining the area through his telescope.

He also notes that at one time a delegate from the mystic village had visited San Francisco and that tall, white-robed, gray-haired, barefoot saints had been seen on the highways and in the streets throughout the area, occasionally even shopping in local stores, paying for their purchases with gold nuggets. Eyewitnesses have also reported strange boats that sail upon the Pacific Ocean only to fly through the air to the mountain.

In any case, there are numerous reports of tall robed strangers visiting local towns and villages to exchange gold dust and gold nuggets for food, clothing and other products.

The strangers appear to be human, except for several peculiarities. They are always described the same. They are “tall, graceful and agile, with distinctive features such as large foreheads and long curly hair; the strangers wore unusual clothes, including headdresses with a special decoration that came down from the forehead to the bridge of the nose.”

Visits from these strangers began to cause considerable interest, and numerous local residents began to investigate the area. Several investigators were surprised to come upon areas which glowed with “powerful illuminations” with no known source. Others claimed to hear strange music.

Reportedly, those who came too close would find themselves suddenly and temporarily paralyzed; or they would be accosted by a “heavily covered and concealed person of a large size who would lift him up and turn him away.”

There are a few accounts of campers who claim to have been visited at their campsite by very tall, friendly people dressed in robes who would hold long philosophical conversations about love, spirituality and the fate of our planet. Needless to say, these antics brought more visitors to the area.

People attempted to chase down and photograph the tall strangers, but in each case, the strangers would either run away or simply vanish. Their rare appearances in local towns continued.

“Those who have come to stores in nearby cities, especially at Weed, have spoken English in a perfect manner with perhaps a tinge of the British accents, and have been reluctant to answer questions or give any information about themselves. The goods they have purchased have always been paid for in gold nuggets of far greater value than the article purchased, and they have refused to accept any change, indicating that to them gold was of no value and that they had no need for money of any kind.”

Other strange effects were noticed. Bright lights would flash causing cars to stall along nearby roadways. Others claimed to see bizarre-looking cattle, “unlike anything seen in America.” The cattle would reportedly run back towards the area inhabited by the strangers.

Mount Shasta is also the location of some of the earliest known UFO sightings.

“There are hundreds of others who have testified to having seen peculiarly shaped boats which have flown out of this region high in the air over the hills and valleys of California and have been seen by others to come on to the waters of the Pacific Ocean at the shore and then continue out on the seas as vessels … and others have seen these boats rise again in the air and go upon the land of some of the islands of the Pacific.” 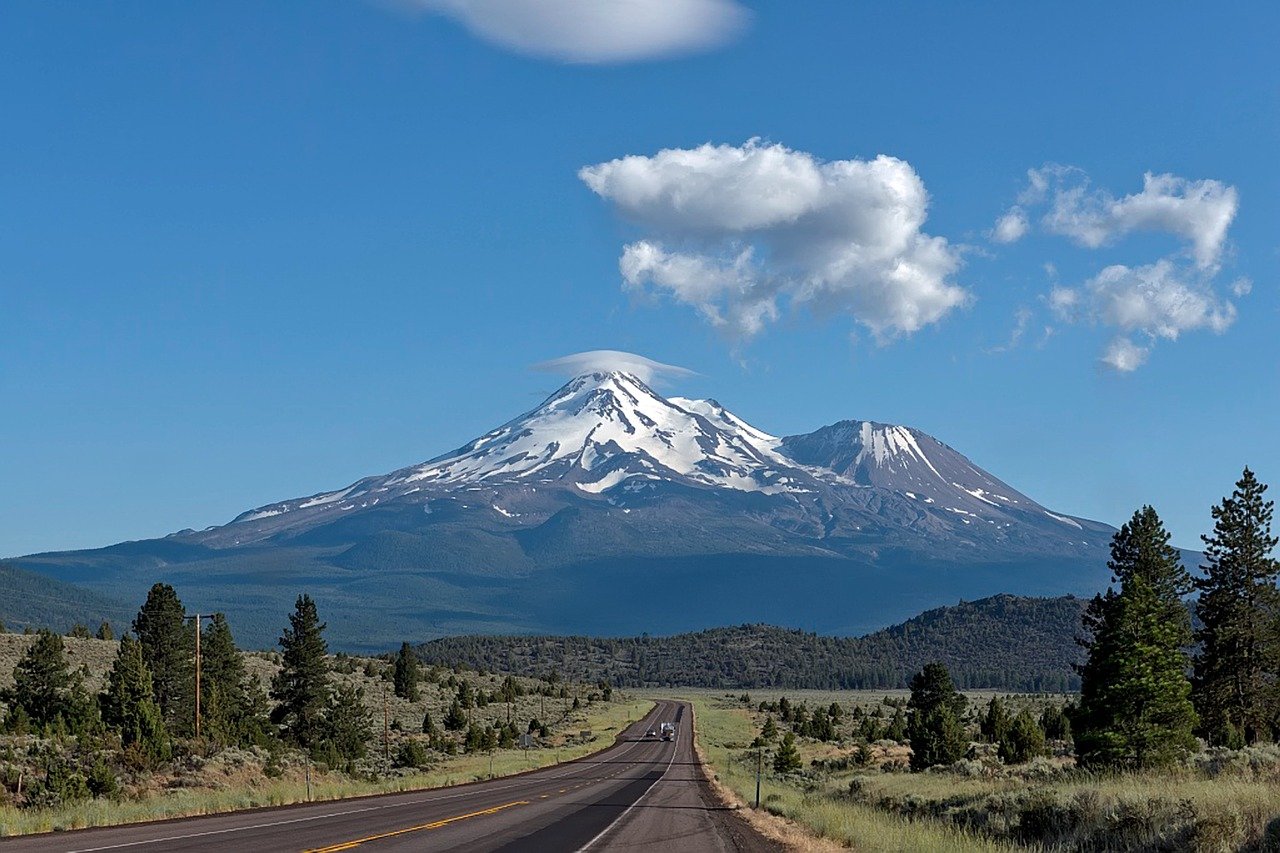 Even today, legends about an underground city beneath Mount Shasta continue to circulate.

The Lemurians allegedly took refuge under Mount Shasta thousands of years ago, during the time of Atlantis. Today they allegedly work towards the benefit of all humanity. They reportedly make use of crystals in their technology, and live in vast caverns deep inside the mountain.

One of the strangest stories to come out of Mount Shasta comes from a young gentleman who prefers to remain anonymous. His story has never been published before and he has no desire for any publicity.

This young man—let’s call him Jason—often went hiking in the foothills of Mount Shasta. He knew little about the strange legends, but just enjoyed the natural scenic beauty of the place.

One day while hiking in this area, he stopped to rest, and to his surprise, became unaccountably fatigued and fell asleep. When he woke up, he got the shock of his life: his long hair had been mysteriously braided with small crystals, various sticks and leaves and flowers.

It had all occurred while he was asleep and totally without his knowledge. He had no idea who would do this to him or why. He couldn’t understand why he didn’t wake up or how it could have happened. He was spooked by the whole incident and told only a few close friends.

Incidentally, Jason is tall, fair and with long hair, somewhat like the description of the alleged Lemurians. It is interesting that the alleged Lemurians are known for wearing fancy head-dresses. Could it be that they were responsible for his strange experience? We can only speculate. Jason admits that he has no idea, but that, as strange as it sounds, it all really happened.