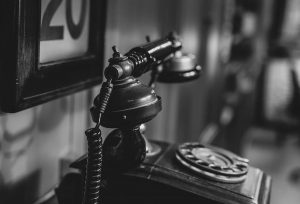 I grew up on a farm in a remote area and I have always been uneasy about being in the house by myself at night. There are no street lights in the area and, at night, it is pitch black outside.

One night, my parents went out and I was home alone. I was sitting on the couch when the phone rang. I picked it up and heard an automated voice say, “Would you like to accept a collect from…” Then I heard a voice say my name. It sounded like my own voice.

I was freaked out, but I accepted the call. “Hello?” I said nervously. There was no reply. I could hear someone breathing on the other end of the line. Then, they hung up.

I was standing by the large windows in the kitchen and, just then as I turned to hang up the phone, I happened to glance outside. In the darkness, I could make out a large figure standing there. He was looking right at me. I ran to the back door and quickly locked it cause it was usually unlocked since we live in such a quiet rural area. I was so terrified, I ran to my mom and dad’s room and grabbed my dads gun. I hid there in the bedroom and I didn’t come out until my parents returned 20 minutes later.

I told them what I saw my dad had checked around the house and had seen footprints that led right to the back door and disgaurded cigarette butts outside like someone was watching n waiting. I guess he was scared away when my parents pulled in.

I still don’t know what happened that night. Was it the future me calling to warn me? Was it a ghost call trying to tell me about the man outside , I have no idea? I do think that call save my life.