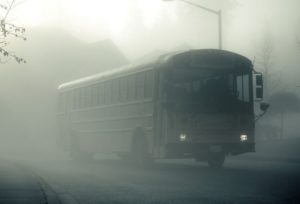 Today, if you are traveling in Mexico, between the city of Toluca and the town of Ixtapan de la Sal, there is a lovely highway that makes the journey quick and easy.

However, years ago, anyone making that journey was forced to travel along a dangerous and winding mountain road. On one side of the narrow road, there was steep vertical rock and on the other side there was a sheer drop.

One evening, many years ago, a bus departed from Ixtapan de la Sal as usual, making the familiar journey to Toluca. It was an overnight trip, so the passengers on the bus took the opportunity to get some much-needed sleep.

When the bus reached the base of the mountain, it started the slow climb up the slope without any problems. Most of the passengers had made this trip many times and they noticed nothing out of the ordinary.

When the bus reached the highest point on the mountain, it began to rain and the driver negotiated the dangerous curves as the road descended. Some very serious accidents had occurred on this stretch of road and many of them had been fatal.

The bus began its descent in heavy rain and the road was slick and wet. The passengers became a little nervous when they realized that the bus was picking up speed. This was unusual. Some of them called out to the driver, but he didn’t respond. The bus got faster and faster and became more and more frightened.

Suddenly, the driver cried out, “The brakes are failing!”

The bus was traveling at such a high speed that it was impossible to control. In the blink of an eye, they reached a curve and the driver swerved. The skidded off the cliff and plunged into the void.

It tumbled down the rocky slope and smashed into the jagged rocks below. Many of the passengers were killed instantly in the crash. Others lay unconscious and bleeding in the wreckage. Then, the bus caught fire and within minutes, it was completely consumed by the flames. Nobody heard the chilling cries of the surviving passengers and they all died in the most dreadful and horrible way imaginable.

Later that night, the police located the site of the crash and called an ambulance. Unfortunately, it was no use. There were no survivors. The bodies of some passengers lay strewn about on the sharp rocks. The bodies of others lay charred inside the smoking wreckage.

Ever since that day, people have reported seeing the old bus traveling late at night on the road from Ixtapan de la Sal to Toluca. They say that if you hold out your hand, the bus will stop for you. The doors will open when you approach it. You will notice that the bus is old but still in good condition. Even if the bus seems to be full, there will always be one empty seat.

If you sit down, you wil feel a strange emptiness in the pit of your stomach. You realize that somethignmis very wrong. Despite the late hour, nobody on the bus is asleep. All of the men, women and children are wide awake, staring straight forward, but nobody is saying a word. There is a heavy silence.

A few minutes later, the bus conductor will walk down the aisle, checking tickets. You prepare the money to pay for your ticket, but the conductor just passes you by.

You arrive at Toluca smoothly, but after midnight. The driver stops the bus before arriving at the bus terminal. Then he turns and tells you that you have to get off. The journey is not finished and you don’t understand why but you obey.

While everyone else stays seated, you get up and walk down the aisle. As you pass by the driver, you attempt to pay for your ticket. He waves away your money.

“There is no charge,” says the driver. “Go now and don’t look back or you or you will never leave this bus.”

Those who obey, who do not look behind, hear the sound of the door closing and the bus engine starting up and driving off. The disobedient, who turn around, will see that the bus is really a charred wreck.

Inside, the emaciated skeletons that line the seats are staring silently through the windows. The bus will disappear and you will die in an accident a few days later. It is said that, from that moment on, your ghost will be sitting in the bus.

If, by chance, you travel to Ixtapan de la Sal one day, do not risk journeying to Toluca at night. There is a chance that you will meet the ghost bus. If you do, make sure you obey the driver’s instructions. Otherwise, you’ll be condemned to travel on that bus for all eternity…