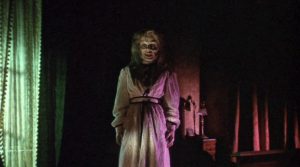 My name is Sergio, I lived in a house in Miami, Florida for over 20 years. I grew up in this house and never felt uncomfortable there until my grandmother passed away in my old room in 1996. She was brought back to life by the paramedics but died a few days later in the hospital.

It usually looked like smoke in the room. It would float around and when I turned the lights on it would disappear. I told my sister and a friend what I was experiencing and they decided to stay the night with me one day.

We were all talking at around 3 am when suddenly we all heard a moaning sound outside my window and felt a strange presence in the room. My sister and I decided to tell my mother. She wasn’t surprised when I told her what had happened. She said she had woken up one day when we were kids and had gone to school because something has ripped the sheets off of her while she slept.

She got up and looked around thinking my dad had come home but no one was there. She said after that she had the house blessed by a priest and nothing else had happened. Until now.

A few days later we were all having dinner when the subject came up. My dad is an old Cuban construction worker. So it wasn’t easy to explain this to him. He wouldn’t listen to any of it. He said we were dreaming and to stop talking nonsense.

We kept trying to argue our point but he wouldn’t budge. He finally got to the point where he had enough and he screamed: “There is nothing here!” We all stayed quiet for a few seconds after he screamed because we didn’t want him to get mad.

During this moment of silence, we heard the front door shaking. Now, our front door was actually 2 doors. One dark wood door in front of a black gate that was supposed to keep out the intruders. The wooden door had a small window in the middle with a two-way mirror to look outside.

I guess my parents were a little afraid of thieves. So, the door starts shaking and all of a sudden the small two-way mirror falls from the door and breaks on the floor. Like if something was saying “I’m here!”.

We looked back at my father who now had a strange look on his face, I guess it was a little fear. But being the big tough guy he portrayed he tried to hide it. My sister and I both turned around and said: “Now do you believe us?”

He paused for a second and said: “It was just the wind!” He still wasn’t convinced. Or maybe he was but didn’t want to show it. I then had many experiences in that house including objects moving, TV and stereo turning on and off and of course, I would see shapes at night when I went to sleep.

It got to the point I wasn’t even scared anymore and would just pray for the ghost whenever I saw it. I even got bold enough to try to touch one but it disappeared before I could. We moved out of the house in 1993.

I had one experience at my new apartment the night after I moved out that caused my bed to shake. I prayed again and it went away. It was the last time I had any more experiences with the supernatural.

I am now married and living in a new place where I can go to sleep in peace every night.