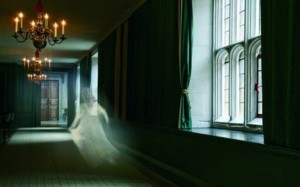 Hampton Court Palace is claimed to be the most haunted royal building in United Kingdom. Most palaces and castles are known to house a few mythical spectres, but the special quality about Hampton Court is the sheer range of apparitions. From wives of King Henry VIII, to Cavalier soldiers, to a ghostly dog, the palace is plagued by over a dozen unexplained phenomena.

Hampton Court was originally bought by Cardinal Wolsey, but Henry VIII loved the building and took it as his own. Henry was the first person to report seeing the decapitated head of his second wife, Anne Boleyn, who was executed for treasonous adultery in 1536. Following sightings of her have described her with, without and even carrying her head. Witnesses say she appears in blue or black, walking slowly, looking angry or upset, and is said to pervade a sense of grief or despair.

Henry’s third wife, Jane Seymour, reportedly the love of his life, was the only wife to be buried alongside him in his death vault. She passed away giving birth to his only son, Edward, in 1537 and was the only one of his queens to die of natural causes before Henry. It is said that on the anniversary of Edward’s birth, 12th October, Lady Jane appears from the Queen’s Apartments and walks round to the Silver Stick Gallery. Witnesses say the apparition wears a white robe and carries a lit candle.

With Jane’s death, Henry’s new-born son was entrusted to the care of a nursemaid, Sibell Penn. Penn died of smallpox in 1562 and was buried in St Mary’s Church, not far from the palace in Hampton. Her spirit was not seen or heard from until the 1820s when St Mary’s Church was stuck by lightning and during the rebuilding, Penn’s remains were removed to another grave.

Since then there have been reports of a tall, hooded figure known as the ‘Grey Lady’ walking the corridors of the palace at the same time as a strange spinning noise was heard in the west wing of the building. The whirring sound seemed to be coming from an odd wall of a corridor, so during investigations the wall was knocked down. Behind it they found a previously unknown room, along with Sibell Penn’s old spinning wheel.

Undoubtedly the most celebrated ghost in Hampton Court can be found in what is called the Haunted Gallery. The ghost is that of Henry’s fifth wife, Catherine Howard, who was beheaded in 1542 for infidelity with younger men. Legend has it that the moments following the ordering of her execution can be seen played out by spectres in the gallery. Witnesses say Catherine’s figure appears screaming for her life, until guards seize her and drag her away. Some people have also seen her trying to find sanctuary in the palace chapel, whilst a palace warder once reported seeing a ghostly hand wearing one of Catherine’s heavily jewelled rings knocking on the chapel door.

Not all the restless spirits that wander the hallways of the palace are of royal lineage. Palace staff have seen a strange grey mist floating along the kitchen floor, and a guard reported seeing a dark, male figure wearing a top hat who just disappeared into the wine cellar. (Witnesses said it was strange, as he looked more like a spirit man!) There are also tales of a ghostly dog being seen entering the King’s Apartments.

Many people have reported seeing two noisy figures fighting in the main courtyard. During renovation work in the yard, the skeletons of two English Civil War Cavalier soldiers were found and given a proper burial. There have been no sightings of the figures since. A group of seven women and two men dressed in old-fashioned clothing are also said to wander Hampton Court. In 1917 a police officer even opened a door for these apparitions, before they simply disappeared into thin air.

Nowadays, visitors to the palace should not be concerned if they see some strange characters in period dress, for many of the specialist guides giving tours of the building now appear in costume. If people do see a ghost there, it seems that none of them are harmful. That said, one lady warder at the palace was standing on duty when she felt something flick her underwear elastic. Perhaps the spirit of Henry is lurking somewhere – and it would seem entirely possible that he has not changed his ways.