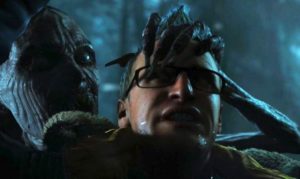 Anomalien.com reader Joshua shares his story about an encounter with the unexplainable.

So first off I would like to say this is 100% true. Now weirdly while this whole story involves me… I didn’t witness a thing.

So some pretext. I have been vacationing at private campgrounds my whole life. My family owns property in the Mohawk trails not too far from Heath, Ma. Beautiful land. Historic property.

Everywhere you go you can see stone structures and property lines dating all the way back to the time the Mohawk Indians used to own the land. Like I said been camping there my whole life and still do. Nothing ever happened (paranormal at least) till this time.

Go back for about five years. My brother still calls this my skinwalker story although I’m not totally convinced. It is weird tho. So five years ago I, my brother, my two cousins were camping for a weekend.

Very calm and peaceful weekend. I was at the private lake fishing off the dock. Not catching anything good. Caught a Pickerel and tossed it in the woods. Continued fishing.

Suddenly I hear: “Josh?!” (my name) come from the right side of the dock a good distance away. Now where the dock was if I looked right I could see and expanse of land that wraps around the lake.

But there were trees and shrubs blocking my view of the path. That’s where the voice came from. I recognized it ads my little brother so I call back “I’m on the dock!”

I see him round the corner and stare at me bewildered. He looks back in the woods and back at me. So I ask him “What’s up?”

“Were you just in the woods? Like… Running through the woods…”

He looked back in then back at me again and says “Dude… I just saw you there… but you were running that way.” He points back in the direction he came from.

“But… I couldn’t hear twigs snapping or leaves rustling… that’s the weird part..” he said. And mind you back then I was around 290 pounds I was a big guy… I’m now down to 210 and even am in the military proud to say but that’s besides the point.

Now, remember how I said I threw a fish in the woods… I then realized I could no longer hear it flopping around anymore… and I threw it in around five minutes prior. So I go to look for it. It’s gone. I searched for a thirty-foot radius. Just gone and there was no sign of animal life coming through and grabbing it.

So that was very odd and to this day my bro tells the story. But then that same day my mother comes up to me at our site and asks me.

“Josh, did you go into the female shower room at the rec hall?” (Obligatory….. I frigging didn’t) She was upset. I say: “No! Are you insane?! Why would I go in there?!”

Apparently she was trying to find an explanation cause I found out a few days later she followed what she thought was me into the shower room and this figure was nowhere to be seen.

And lastly, something not involving me. My two cousins were from different sides of the family and they didn’t know each other that well.

So the last night we were there my cousin (female call here Keri) wakes up in bed. And the sun is beginning to rise. She turns over and sees my other cousin (call him Jose) sitting in a chair and listening to headphones starring out the window.

So she turns back over to try and fall asleep… She can’t. Feels uncomfortable since they don’t know each other so she turns back and he’s completely gone. Later on turned out he never left his bed. He was still asleep.