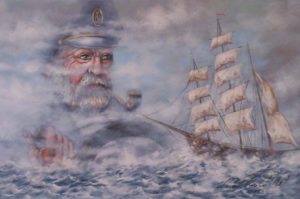 It had been very stormy few days, and Captain Hatfield was very tired. When the storm had finally calmed down, the captain went to his cabin for some much need sleep. Not long after falling asleep, a man came into his cabin, woke him up, and told him he had to change course.

The captain was very upset about this, and went up on deck and flew into the mate. The mate swore that there was no one that went down to his cabin. So the captain, thinking that maybe he was dreaming, went back down to his cabin.

Not long after the captain went back to his cabin and fell asleep, the man woke him up once again, telling him that he had to change his course.

This time the captain agreed, and instructed his crew to change course, and went back to his cabin to get some much needed sleep.

By this time the crew really thought that Captain Hatfield was crazy, but orders were orders, and they changed their course. The next morning, as soon as it became daylight, the crew sighted a ship in the distance that was sinking. The crew launched their life boats, and were able to rescue everyone from the sinking ship!

As they were returning to port, the rescued captain and his wife, asked Captain Hatfield what happened to make him change his course. When the captain told them the story of the events leading up to the rescue, they asked the captain to describe the man to them.

When captain Hatfield described the man to them, the wife said “that was my father, and he’s been dead for ten years”

This story was originally recorded at The Maple Inn, during our interview with Parrsboro Historian, Ed Gilbert. The boat that sank was believed to be that of the Arlington, a square-rigged ship built in 1868, Port Gilbert, NS., source: Caretakers Paranormal