Hart Island or as it is more commonly known “The Island of The Dead” is run by the NYS Department of Corrections and unless you are a convicted prisoner of the locality, you wont be allowed to set a foot on it. Even the press is not allowed access except for a few guided tours granted over the years. The 101-acre island serves as a separate burial ground, the city’s last potter’s field, for those who are either unclaimed or whose families couldn’t afford a funeral. The island is uninhabited today, but more than a million dead have been buried there since 1869, One third of them are infants and stillborn babies, with the dead being buried in trenches, making it the largest tax-funded cemetery in the world.

Family members of those buried in the cemetery are now allowed a supervised visit, the Family members, accompanied by guests, may visit grave sites of their family members on one weekend day per month as of July 2015. The first visit took place on July 19, 2015. In 2017, the City increased the number of allowable visitors per month from 50 to 70. Trespassing is punishable by up to two years in prison which does nothing to help dissipate the many mysteries surrounding this tiny island famous for hosting one of the world’s largest mass grave.

Even so, there are some “notable” people buried at Hart Island, discovered after. Bobby Driscoll, the Disney child actor is buried there. He was the voice of Peter Pan in the animated film and stared in Disney’s Song of the South. He died unknown, thought to be homeless, so was taken here.

Burials on Hart Island began during the American Civil War. It served as a POW camp for four months in 1865 during which 3,413 captured Confederate soldiers were housed on the island, 235 of them died in the camp. The island then served as a quarantine station when yellow fever hit New York in 1870. A women’s insane asylum was build in 1885, which is still standing today. The island then housed a reformatory for delinquent boys.

During World World War II, Hart Island was handed over to the Navy to use as disciplinary barracks, but soon after it was returned to the Department of Correction in 1946 after the war ended. The reformatory prison system resumed activity until the island was transformed into a site for a narcotics rehabilitation centre in 1966. This lasted until 1976, by which the Community Mental Health Centers Act had replaced a large number of institutions with less isolated community clinics. The Department of Correction took control of Hart Island once again, and made a final attempt to operate a small prisoner contingent in 1982 until the program was terminated due to the lack of convicts.

“The Island of The Dead” as it is often called has been used primarily over the years as a dumping ground for those not lucky enough to have a proper burial. Amazingly, when you consider the tiny island is approximately a mile long and one quarter of a mile wide over a million people have been buried in mass graves and upwards of 1500 a year are being added to that total to this very day. The vast majority of people buried there – dumped in trenches by inmates – died alone, abandoned or unclaimed by relatives or friends. Some were homeless, mentally ill, alcoholic or just too poor to be buried anywhere else. Many were children and in a lot of cases, orphans. 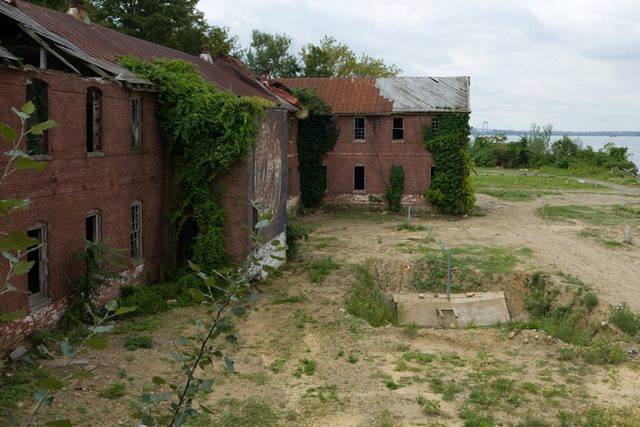 No ceremonies, just interred without much decency or dignity. There’s no doubt that this island houses many restless souls too bitter or angry to move on. With such a dark and gloomy history, it is no wonder many believe this island to be extremely haunted. Unfortunately, for 99.999% of us, we’ll never be able to set a foot on the island to really find out, unless you happen to be a Rikers Island inmate, as it is them who bury the bodies on Hart Island.

From the 1990’s until now, Hart Island is an area purely dedicated to burials. Inmates from Rikers Island are ferried over on weekdays to perform the burials, disinterments and maintenance tasks. Despite the island being a public burial ground, the Department of Correction has always prohibited people from accessing Hart Island, with the exception of family members of those buried in the cemetery.

But even so, families of the deceased are overwhelmed with red tape when attempting to arrange a visit. According to Melinda Hunt of The Hart Island Project, New York City is the only municipality that demands people to provide a death certificate before visiting the public cemetery. Visits are limited to one day a month, there’s no map of the burials, and no one is permitted to visit a specific grave. The Hart Island Project is a non-profit dedicated making Hart Island visible and accessible, “so that no one is omitted from history.”