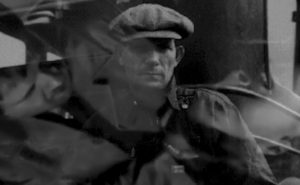 In June of 1938, a man named Carl Pruitt was said to have uncovered his wife’s infidelity, by catching her with another man in their own marital bed. Distraught with the betrayal, he grabbed a chain and strangled her to death, whilst his wife’s lover escaped through a window.

Once his rage had subsided and he realised what he had done, Pruitt committed suicide. Unsurprisingly his wifes family refused to forgive Pruitt, so he was buried in a different cemetery in a different town.

Visitors to the cemetery soon began to notice something rather peculiar was going on with Pruitt’s tombstone. there was some discoloration that looked like circles, and then they started to link together, making it look like there was a chain on the tombstone. Then the legend was born, as the victims started mounting up.

The tombstone began to get the attention of some of the local people, including a young group of boys who rode their bikes over to the cemetery about a month after the chain had formed. To impress his friends, one of the boys, James Collins threw some rocks at the tombstone which caused some chips to it.

As he rode home, there was a freak accident, and he lost control of his bike crashing into a tree, the chain came off his bike and wrapped around his neck, strangling him to death.

The boy’s devastated mother decided to take it out on the tombstone. She took an axe to the tombstone, partially destroying it. The next day, she was hanging up laundry when the clothesline somehow wrapped around her neck and strangled her. When her death was investigated, the axe was found with rock dust on it and it was dented, but Pruitt’s tombstone remained intact.

A short time later, a farmer was riding in a horse drawn cart with his family past the cemetery, and upon telling them that he wasnt afraid of any ghosts, he duly fired several shots from his gun at the headstone.

The gunfire spooked the horses, causing them to bolt. The farmer’s family jumped from the wagon to safety, but the farmer was less fortunate and stayed on the wagon until he was thrown from the carriage and a rein wrapped around his neck, strangling him.

Two policemen, who were convinced the curse was nonsense, went to the cemetery and took pictures of themselves in the area of Pruitt’s grave. As they drove away, a bright light started following them and they tried to speed away.

This led to them driving off the road into a fence and the officer in the passenger seat was thrown from the car, but survived. His partner, on the other hand, had been nearly decapitated by a chain between the two fence posts.

By the mid 1940s most people were rather sensibly avoiding the old cemetery, but one local man, Arthur Lewis, decided he was going to prove that the stories were superstitious nonsense and went into the cemetery with a hammer with the sole intention of destroying the headstone once and for all, and started to smash the tombstone with a hammer.

People could hear the hammer bashing against the tombstone and then that was replaced by blood curdling screams. People went to investigate the screams and they found the man dead at the gates.

Apparently he was frightened by something and ran away. As he got to the exit, the chain used to lock the gates somehow wrapped around his neck and strangled him to death.

After this final death, not only did burials stop taking place, but people started having the bodies of loved ones exhumed from the cemetery and reburied elsewhere and Pruitt soon had the whole cemetery to himself. In 1958 a strip mining operation was undertaken and Pruitt’s vengeful tombstone was finally destroyed.

Adelaida Orantier: A Haunting In Mexico