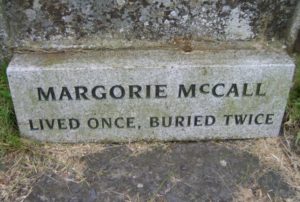 After succumbing to a fever of an unknown origin in 1705, Irish woman Margorie McCall of Lurgan, was hastily buried to prevent the spread of whatever disease had killed her.

Margorie was buried with a valuable ring, which her husband and several mourners at her wake had been unable to remove from her finger, due to the fact it had swollen considerably since she had passed away. This made her an even better target for body snatchers, who could cash in on both the corpse and the ring, and news that she had been buried with her expensive gold wedding ring had become known to some local body snatchers.

After the wake which was traditionally an attempt to avoid premature burial as the family of the deceased would sit and watch over the body for a few days to see if the person awakened, Marjorie was buried in Shankill Graveyard.

The evening after she was buried, before the soil had even settled, the grave-robbers showed up and started digging, working under cover of darkness they grappled in the dirt until they reached and opened her coffin. True to the rumor, the ring was still on her finger. Before removing the body, they attempted to remove the valuable ring, but it wouldn’t budge. Determined to prevent the ring making its way to the surgeon’s slab, and since she couldn’t get any deader, they agreed to cut off her finger to free the ring. As soon as blood was drawn, Margorie awoke from her coma, sat straight up and screamed like a banshee.

The fate of the grave-robbers remains unknown. One story says the men dropped dead on the spot, while another claims they fled for their lives and never returned to their chosen profession.
Margorie climbed out of the hole and made her way back to her home. Her husband John, a doctor, was at home with the children when he heard a knock at the door.
He told the children, “If your mother were still alive, I’d swear that was her knock.”

When he opened the door to find his wife standing there, dressed in her burial clothes, blood dripping from her finger but very much alive, he dropped dead to the floor.

Joy and sadness in equal measure for the rest of the family. Margorie alive and relatively well, but John deader than Margorie ever was. He was buried in the plot Margorie had recently vacated.

Margorie went on to re-marry and have several children.

When she did finally die, she was returned to Shankill Cemetery in Lurgan, Ireland, where her gravestone still stands. It bears the inscription “Lived Once, Buried Twice.”