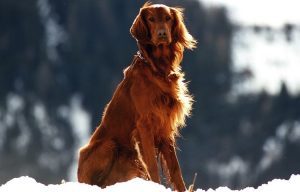 Dogs and other animals have demonstrated psychic ability, which is termed anpsi which is part of the paranormal realm. The sixth sense of dogs has been demonstrated, tested and documented many times.

They have found their loved ones when the humans have moved far from home to a place the dog had never been or found their way back home from long distances, psi-trailing. They have reacted to the presence of a ghost, ghost seeing. They have become ghosts.

Most people have heard of the curse of King Tut’s tomb. Harry Carter was the archaeologist who discovered the tomb. Lord Carnarvon was his patron who financially backed the expeditions. When Carnarvon died in Egypt, his dog, in England howled all night, then died himself.

In 1928, Mai Packwood was bringing wash in from the wash line at 11 PM. Her husband, Tom, was at work and would not get home until 2:15 AM. As she shut the back door behind her, she heard the lock click.

She did not usually lock her doors, although the neighbors used to advise her to keep them locked. She realized she had left the front door unlocked. She put the laundry basket in her children’s bedroom when she heard an angry growl from a large dog. The growling grew louder, then the animal gnashed his teeth. Mai was stunned. They did not have a dog and the neighborhood dogs were small.

The woman peeked out of crack by the door and saw the biggest dog she had ever seen. Hackles on his neck and shoulders were raised. His muscles were tense and he was crouched, ready to spring. Then she saw what the dog reacted to. A man was slowly coming up the stairs. Mai felt terrified.

She felt the intruder was dangerous and destructive. When the man put his foot on the landing and the dog was upon him. They rolled down the stairs and, when they got to the bottom, the man screamed, shook himself free and ran away.

The dog followed him out to the porch and lay down with his back to the door. She locked the front door. Mai wanted to pet the dog, but she was afraid to go outside.

When Tom came home, he asked Mai where she got the dog. She told him what had happened while she made a steak for his dinner. Before Tom ate, they both went out and petted the huge animal. Tom said he had never seen such a big dog. The couple hoped the dog would stay.

Tom gave the dog his steak, but the animal did not eat it. The next morning, both the dog and the meat were gone. Mai and Tom spent most of the morning, driving around and looking for the dog. They asked neighbors about the animal and wire greeted with skeptical looks when they mentioned his size. They never saw the dog again.

That evening, there was an article in the paper about a criminally insane man who was recaptured about a mile away from where Mai and Tom lived. He had deep bite marks from a dog he claimed was as big as a yearling. The authorities did not believe the size of the animal was true, but they made sure the criminal got rabies shots.

Gavin de Becker is an expert in predicting and managing violence. A friend of his decided not to hire a building contractor because her dog, Ginger had a bad reaction to him. De Becker believes that the dog was reacting to his friend’s intuition.

When I taught horseback riding, I had read that horses sensed fear people had of them by smelling a scent they gave off. Do animals smell scents or are they telepathic?

Dogs have been known to give early warning signs of epileptic seizures, heart attacks and diabetic comas. Andrew Edney DVM examined 121 accounts of dogs doing this.

Elizabeth Rudy DVM has a dog named Ribbon. The vet also has epileptic seizures about once a month. The dog’s accuracy in predicting the seizures is 100%. The dog will stop and put her head down while on a walk. When indoors, Ribbon will lick Elizabeth’s hands, stare at her, or continue licking her hands.

Angie Barnum has a guardian dog, Sheba, a German shepherd. Angie has a form of epilepsy and has suffered violent seizures since she was a baby. As she grew older, she suffered up to 15 seizures a day and was confined to a wheelchair.

Sheba can predict seizures even when Angie is asleep. One night, Sheba woke Angie’s mother and led her to the girl’s room. Angie’s heart and breathing had stopped, but Mrs. Barnum was able to revive her.

Do dogs smell a chemical imbalance? Do they sense a drop in the person’s body temperature? These are the two prevailing theories as to how dogs detect seizures, cancer and heart attacks. Or, is it anpsi?

A soldier in Viet Nam got relieved of military duty there early. He wanted to surprise his family and did not let them know about this. The family dog ruined his surprise. Before the man arrived home, the dog would bring items out of his room and put them by the front door, which is what he did to ruin the soldier’s surprise.

Psi trailing is when an animal finds its was home or to a place where its family has moved to.

Joker was a cocker spaniel whose owner was Stanley Raye, an Army captain during World War II. The captain was deployed to a remote Pacific island. The dog made it to Oakland where he got aboard an Army transport. The ship’s captain was going to have him thrown overboard, but a major volunteered to take care of the animal.

The ship made many stops at different ports to delivers goods to Army bases. Joker sniffed the air at each stop. When the ship docked at one particular port, the dog jumped off of the ship, found Raye and happily greeted the astonished man.

The Hutchinsons moved from New York to Indianapolis, leaving their four year old beagle, Oscar behind with their grandson who loved the dog. The dog had never been out of the neighborhood, but, seven months later, he arrived at the Hutchinson’s new home.

Baby was an epileptic cocker spaniel, yet, she found her way home. She had been dognapped eight months previously. To make things more complex, her family, the Donegans, moved from Melrose Park to Addison. The family believes Baby had one of her seizures and the dognappers cut her loose.

The dog found her way to Mrs. Geitz’ home. The woman is Mrs. Donegan’s mother. Baby had visited the grandmother’s house before. Mrs. Donegan was overjoyed when her mother called to tell her Baby was there. The dog still had her tags on. For other cases of psi trailing, please read my article, Psi-trailing: Animals’ Incredible Journeys, which includes Bobby’s incredible journey.

Yes, dogs exhibit psychic ability, although, some, like detecting seizures and other health problems and sensing fear could be attributed to a keener sense of smell or other scientific factors.