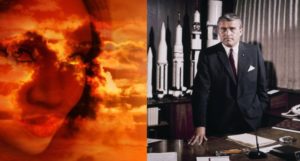 The concept of life after death or the afterlife is often brought up in a religious aspect, but now even scientists weigh in on whether or not one of the biggest mysteries of life exists. NASA rocket engineer Wernher von Braun said that the afterlife exists, and science can prove it.

Many religions touch on the aspect of an afterlife, and history has also revealed that people from older civilizations believed that there was life after death.

Von Braun, the agency’s top rocket engineer who also played a part in the United States winning the space race against Soviet Russia, said in his book titled The Third Book of Words to Live By, that the guiding principles of the universe can confirm that God exists as well as the afterlife.

He explained that nobody, or nothing in general, truly disappears from the universe and that the human soul is as immortal. Von Braun also believed that those who believed in the afterlife were further motivated to be better people, despite the skepticism that Science may often give.

“I think science has a real surprise for the skeptics. Science, for instance, tells us that nothing in nature, not even the tiniest particle, can disappear without a trace,” explained von Braun.

The rocket engineer also likened this concept with nature, and how it does not go extinct, but only transforms.

“If God applies this fundamental principle to the most minute and insignificant parts of His universe, doesn’t it make sense to assume that He applies it also to the masterpiece of His creation – the human soul?”

He publicly spoke and wrote about the complementarity of science and religion, the afterlife of the soul, and his belief in God. He stated, “Through science man strives to learn more of the mysteries of creation.”

Von Braun is not the only scientist who believes that the afterlife exists as there are others who believe that humans somehow continue to go on even after death.

Physicist and comedian Aaron Freeman weighed in on the concept back in 2005 at an NPR broadcast. Freeman explained that the universe is “hardwired” to conserve all energy, including the energy of human beings.

Not touching on the religious aspect of the afterlife, Freeman continued to say that humans remain a part of the cosmos even after dying. Based on the law of the conservation of energy, energy cannot be destroyed; it can only transform. Freeman then argued that this also applies to humans, saying that the energy in humans does not disappear but is only rearranged.

Psychiatrist Who Studies Cases of Past Life Memories in Children

Life After Death: Are There Clues From Near Death Experiences?