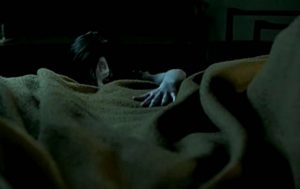 The story I’m about to tell you happened to me directly and has forever changed my view on the supernatural. I would like to state for the record that I have always been a skeptical person who never believed in anything that couldn’t be proven.

Before my experience, I didn’t believe in ghosts and had never given the topic a second thought. Since then it has been on my mind frequently.

This is my story.

The event in question occurred several years ago at my grandparents’ house. I was 19. I had been out with my friends and returned home around 2:00 am. I retired to my bedroom on the second floor of the house and got into bed.

I had been lying there for two or three minutes reflecting on the events of the evening when suddenly I heard the muffled screaming of a woman coming from the basement. Almost immediately the screaming began to slowly ascend the stairs and within a minute had reached the first floor.

It continued to ascend the stairs and thirty seconds later had reached the second floor and was right outside of my room. The screaming was very loud and was clearly that of a woman. My bedroom door was closed and I could, therefore, see nothing.

The screaming continued outside of my room for approximately one minute and then slowly began to descend the stairs into the basement just as it had come. When it reached the basement the screaming ceased and the house was silent. That is the end of my story.

I feel that in order for me to give an objective account of this occurrence, it is important that I detail my own actions and opinions.

When I first heard the noise I recognized that it was coming from the basement, and although it sounded like a woman screaming I immediately disregarded this as being ridiculous. I started to try and rationalize what I was hearing however my analysis ended rather abruptly when I realized that the noise was getting closer.

By the time it reached the first floor it had become quite loud and being unable to think of any rational explanation for such a noise, I became convinced that the ghost of a woman was ascending the stairs of my grandparents’ house. I became completely terrified and quickly sat up in bed, both so that I could hear better, and so that I could run, if necessary.

When it reached the second floor and was outside my room every hair on my body was standing on end and my hands were literally shaking with fear. I was too scared to move and for that reason remained stationary until it returned to the basement and the noise subsided.

I stayed where I was for several minutes waiting for the noise to return. When it didn’t, I got up, turned on my light, and sat back down on my bed. Being wide-awake and in no mood to sleep, I spent the next couple of hours lying in my bed listening and thinking about what had happened.

Eventually, I fell asleep and the next morning when I woke up my light was still on and I was completely convinced that I had heard a ghost. I spent the entire day gathering information and trying to figure out what I had heard.

The only other people in the house were my grandparents. My grandmother is a sound sleeper and my grandfather is hard of hearing. They heard nothing. They bought the house in 1966 and sold it in 2000.

I considered that maybe the pipes or something else in the house made the noise, although I don’t think any pipe on earth could have made the noise I heard. I dismissed this theory anyways because if the house did make odd noises someone would have heard them in the past thirty years.

I also dismissed the wind because I have spent many windy nights in the house and heard nothing. In the end I came to the conclusion that there was no earthly explanation for what I heard and that what I experienced must have been supernatural. It sounds crazy saying that but I know what I heard, I will never forget it. I’m sure it was a ghost.

In conclusion, I would just like to state that all of my friends think I was asleep and that the whole thing was a dream. I would like to touch on this briefly. The first thing I would like to say is that I know I was not asleep.

I had only been in bed for two or three minutes (less than five for sure) and was lying on my back thinking. I have always had a difficult time falling asleep, it usually takes me twenty or thirty minutes, and I have never been able to sleep on my back.

At the time I was making no attempt to sleep, but was lying there thinking. Secondly, no matter how real a dream seems you always wake up afterwards and that’s how you know you were dreaming. I don’t think it’s possible to remember a dream without waking up and realizing you were dreaming. If it is, it’s never happened to me. If it had been a dream I would have woke up and said “wow, that was one weird dream.” That never happened. I was awake.

Thirdly I turned the light on after the occurrence and it was still on when I woke up in the morning. I know for a fact that I was awake.

That is my story and I swear to you that every word of it is the truth.

I don’t know if you will, believe me, no one else does, but I swear it’s the truth.

I have three questions. Hopefully, someone can give me some answers.

1) Do you think this was a ghost, or am I losing my mind?

2) Why, in so many years, did this only happen once?

3) Do you know of any other cases similar to mine, and if so where can I read about them?