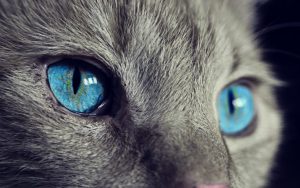 Cats and other animals have demonstrated psychic ability, which is termed anpsi which is part of the paranormal realm. The sixth sense of cats has been demonstrated, tested and documented may times.

They have found their loved ones when the humans have moved far from home to a place the cat had never been or found their way back home from long distances, psi-trailing.

Cats have demonstrated the ability to sense danger and have been known to predict volcanic eruptions and earthquakes.

In 1944, Toto lived with in a town near Italy’s volcano, Mount Vesuvius. One night, he woke up his owner by repeatedly scratching his check. The man was angry and could not make the cat stop.

His wife knew this behavior was strange, then thought the cat did this because he sensed Vesuvius was going to erupt. She convinced her husband to get up, pack some things and get out of the area. The volcano erupted an hour later, burying their house and killing 30 people.

In 1976, in the Friuli district of northeastern Italy, people noticed cats were running about madly, scratching at doors to get out of their houses and disappearing once outside. The odd behavior began in the early evening. At nine PM, a major earthquake hit the area.

The same thing happened in 1975 in Haicheng, China. Seismologists evacuated the city 24 hours before a major earthquake hit. It was the cats’ behavior, not their scientific equipment that led to the evacuation.

Last summer, there was a report about a cat who saved a family from perishing in a fire in the Philadelphia, PA news. The cat woke his owner and acted strangely. The man got up, looked out of the window and saw the neighbor’s home was on fire. He called 911 and woke the family. Had it not been for the cat, the family would have died in the fire that would have engulfed their home.

Admittedly, cats have shown natural sensitivity to weather changes, electrostatic activity in the atmosphere and vibrations, so this could be a natural, as opposed to psychic ability, of the cat’s ability to predict disasters. This does not explain how the cat in Philadelphia saved neighbors from the fire.

Cats can have a telepathic bond with humans and exhibit this.

Ernest Bozzano was writing late at night when he sensed his cat needed him. He was so convinced that he searched the house for her. She was not in the house. He looked for her in the yard. He heard a muffled mewing when he called to her. She was caught in a rabbit trap with a loop around her neck and, had she moved, she would have strangled to death.

Another time, the cat was lost. Bozzano and his family searched the house and yard for her with no success. The man had a vision of her in an attic room which was almost always kept shut off. He went to the room, opened the door and found her.

Cats can sense the death of a loved one. There was an elderly man who was lying in his bed at home close to death. He loved his cat. The family decided not to allow the cat in the bedroom. The cat’s behavior became odd. Finally, they were persuaded to allow the cat to join the man.

The cat jumped up onto the bed and onto the man’s chest. The cat was satisfied that the last respects were paid, jumped off of the bed and quietly laid down.

Fidget and his owner shared a telepathic bond. One day the man was hit by a car. As he was dying in the hospital, he asked the staff to have a neighbor care for the cat. The burial took place two days after the man died.

The neighbor made the arrangements. When the man got to the cemetery, he was amazed to see Fidget waiting by the empty grave. After the owner was laid to rest, the cat walked back home.

Alexander Dumas had a cat named Mysouff. Whenever Dumas came home from work, the cat would meet him at the street corner and escort him the rest of the way home. The author usually came home at a regular hour, but, sometimes, he was late.

Dumas’ mother would open the door for Mysouff so the cat could escort him. When Dumas was late, the cat refused to move. When he sensed Dumas was about to arrive, he would leave the house and greet his master.

Cats have been known to find their human loved ones, traveling many miles either back home or to a new home they had never been to. This is psi-trailing.

Rusty’s owners moved from Boston, MA to Chicago, IL in 1949. They left the cat behind. He met them on the doorstep of their new home 83 days later.

In 1954, a cat’s family moved to a new home in Louisiana, 300 miles from the old one. One day, the cat arrived at the son’s school. The animal ran away from the other pupils, but allowed the son to pick him up.

There was undisputable proof that it was the same cat and not a case of mistaken identity. The cat had been taught things by the family dog: to growl and bite when angry and to answer to a whistle. When the boy and the cat arrived home, the dog greeted the cat. The cat also had some distinctive markings, one of which was a scar over one eye.

Sugar’s family moved from Anderson, CA to Gage, OK and left the cat behind to live with a neighbor. Fourteen months later, the cat arrived at the new home after traveling nearly 1400 miles.

Murka killed two of her owner’s prized canaries and was banished to a relative’s home in Voronezh, about 450 miles away. About five months later, she returned to Moscow. Her owner forgave her and allowed her to stay.

In February, 1966, Blackie returned home in Forked River, NJ. The Persian had been accidentally left behind in Florida during Thanksgiving of the previous year.

Probably the long distance record for a cat to find the way home is 2500 miles. In 1949, Mr. and Mrs. Charles Smith decided to move from St. Petersburg, FL to San Gabriel, CA. Robert Hanson who bought their old home developed a rapport with Tom, the Smith’s cat, so they decided to leave the cat with him in order to spare Tom the trauma of the move. Two weeks later, they learned Tom ran away.

In early August, 1951, more than two years later, Mrs. Smith was annoyed by a cat wailing in the yard and asked her husband to chase the anima away.

When Mr. Smith went out to chase the cat, he was stunned. The cat ran to him and jumped into his arms. He realized that the cat was no stray. It was Tom!

Mrs. Smith did not believe the cat was really Tom, so she decided to test the cat. Tom had been raised on baby food and loved Pablum. She out some in a saucer and put it on the floor. Tom, hungrily, ate it. This proved to her that the cat was Tom.
Jay, Roni, The Kingdom of the Cat. ISBN: 1-55209-480-4. This is a “must have” book for cat lovers! It covers many facts about cats and has breath-taking illustrations!