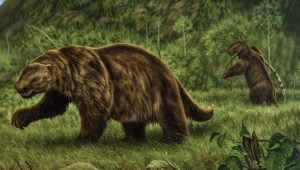 According to legend, Mapinguari is slow, ferocious and dangerous because of its ability to move noiselessly between the vegetation. It avoids bodies of water, which limits its movements in an area where many rivers, brooklets and lagoons exist.

Most accounts state the creature is a carnivore although not necessarily human eater. When it senses humans, it stands up on its rear legs and is as tall as seven feet. The nocturnal animal has a lumbering gait like Grizzly bears.

According to some accounts, the creature has characteristics related to other preposterous beings of Brazilian mythology, like backward feet, long claws, caiman-like skin, and a second mouth on its belly.

Mapinguari is, by some witnesses, described as a Bigfoot-like creature. Most think of it like a hairy giant ground sloth that can stand on two legs appearing like an ape man.

Natives aver that when they startle one it emits a foul stench from its stomach. It’s said to have a flat snout and, normally, it moves clumsily on four legs.

Paulo Aníbal G. Mesquita went into the interior of the Amazon region knowing mapinguari legend and intended to investigate the possibility that this cryptid still exists and might be the last of the megafauna of the Amazon.

These are large animals of a particular region or time. Generally, they are defined as animals that weigh over 1102 pounds to over a ton.

Mesquita’s group investigated reports of the mapinguari in some remote parts of the Amazonian jungles. They collected many reports of people who saw the cryptid. One allegedly attacked a landlord in a village north of Mato Grosso.

It is unclear whether the cryptid exists. Ornithologist David C. Oren, head of the Zoology Division of Emile Goeldi Museum in Belém, Brazil, spent eight years gathering accounts of the creature.

His findings suggest that the Mapinguari may be a descendent of Megatherium, a species believed to be extinct, and he speculated it might be a surviving Mylodon.

Megatheriinae were a group of elephant-sized ground sloths that lived from 2 million to 8,000 years ago. Its smaller ground sloth-type relatives were the Mylodon.

Unlike the modern tree sloth, Megatherium was one of the largest mammals to walk on planet earth. Weighing almost as much as an African bull elephant, it had huge claws on its feet.

Fossils of its footprints show that it walked primarily on its hind legs. When it stood on its hind legs, it was about twenty feet tall. The Megatherium had a skeleton with a large pelvic girdle and a broad, muscular tail.

Its large size made it possible to feed at heights unobtainable to other contemporary animals. Rising on its hind legs and using its tail to form a tripod, the Megatherium was able to support its body weight while using its forelegs with curved claws to pull down tall branches.

Its large deep jaw is believed to have had a long tongue which it would use to pull leaves into its mouth as today’s sloths do.

Possibly, a great climatic change was one of the factors that led to the giant sloths’ extinction. Many fossils of the Endedata-Pilosa group of giant ground sloths were been found in all of South America.

Some became extinct recently, in geologic terms, 6000 years ago. According to research, during the time megafauna lived, the Amazon was not a rainforest, but was a savanna, where forests were confined to the longest of the major rivers

Oren collected evidence to prove the Mapinguari existed, but some of which were anteater scat, agouti fur, inconclusive tracks and tree claw marks.

He still considers the creature to be real, highly elusive, extremely rare and avoiding human contact. Until a live specimen is caught and a corpse is found, the Mapinguari remains a cryptid and creature of legend.

Mystery of The OwlMan of Haverfordwest