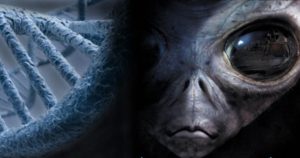 According to GLAS.RU, scientists Vladimir Shcherbak and Maxim Makukov are sure that a person was once genetically designed by technically developed representatives of other civilizations living in another star system. Presumably this was done about 100 million years ago.

Scientists say that it is possible that the aliens sent a coded signal to Earth, which introduced changes in human DNA.

According to the second theory, they arrived on our planet with ready-made genetic material that was introduced into the human body. Interestingly, but this theory received support from influential scientists, including Francis Kirk, who is involved in the discovery of the DNA molecule.

A number of interesting hypotheses can be formulated, but one thing is certain that modern scientists do not know much about the origin of life on Earth. At each stage of research, new puzzles and inconsistencies appear, which have yet to be solved by scientists.

Researchers believe that if an alien mind exists and leaves a kind of encrypted message for humanity, then it is likely that he left it in the body of the person himself, his DNA. He did this intentionally in order to check the level of human development at a certain stage of development.

Could this be true? Scientists are trying to find out.