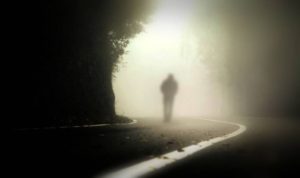 Days spent in the city if Baraboo Wisconsin are generally full of fun and shenanigans. But while driving through the area of Highway 12, some people have reported seeing a hitchhiker in a tattered green army jacket.

When people pass him, and look back in their rearview mirrors, the man is gone. No one has actually claimed to have picked this man up, but he remains on the side of the road waiting for a ride.

Highway 12 dates back to at least 1917 when it was known as WIS 12. With the 1926 US highway system in place, the road kept the same numerical designation and basically the same path. In 1993, the section of highway through Wisconsin was named the Iron Brigade Memorial Highway in honor of a Civil War Union unit from the area.

For years, drivers have reported a man wearing what appears to be a beat up green army jacket from the 1960s and blue jeans walking down the road. In most reports, this man is said to have a dark beard, and long, greasy dark hair.

Drivers will pass him, not paying too much attention to the scraggly man, but then are overwhelmed when after traveling for about a mile down the road, they see the same man, still walking down the side of the highway.

How could this man have gotten ahead of them so quickly when no other cars have gone by? Some brave souls have attempted to give the man a ride, but find that he vanishes from sight before he reaches their car.

This particular section of highway has undergone some changes and upgrades in the past years, with more scheduled for the coming years, yet that doesn’t seem to have deterred the phantom hitchhiker from making his presence know.

There was a reported sighting in November, 2011 by a truck driver. The driver spotted the man about 9:45 pm near Ski-Hi Road. He was spotted again by the S-curve near Skillet Creek.

Another witness shared his story, in which he gave an excellent physical description of the man, and pointed out that he saw the man for the first time near the airport on the east side of the road and again near the S curve between the cemetery and the trailer park.

Although many have tried to find the phantom hitchhiker, no one has yet been able to explain who he is or why he is haunting this particular stretch of road. So it remains a complete mystery.