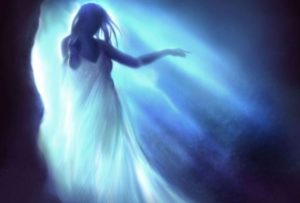 Travelers who claim to have seen Catherine’s ghost on the hill most commonly describe a woman approaching the traveler asking for a ride, sometimes to Bar Harbor. Catherine is said to be dressed in a light blue evening or ball gown.

Travelers who decline the ghost’s request suffer various consequences. Purportedly Catherine was traveling on the road with her husband or boyfriend, after their wedding or prom night in Bar Harbor, when they were in some kind of accident (that it was a car accident is belied by the fact that the “Catherine’s Hill” moniker predates the widespread use of cars in the area, at least back to the 1930s).

It is said that Catherine lost her head in the accident, that her significant other was never found, and that Catherine wanders Catherine’s Hill and the Blackwoods area searching for her head and her missing love.

The book Dark Woods, Chill Waters: Ghost Tales from Down East Maine contains several variations on the legend. It also includes testimony suggesting that the Catherine legend may have been based on an entirely uneventful evening in the life of one Catherine Downing, d. December 29, 1862.

Some of you who have driven the Black’s Woods Road in Downeast Maine between Franklin and Cherryfield, may have heard about the legend of Catherine’s Hill.

Prepare yourself for some terrorizing accounts from those who have had been frightened by seeing the figure.

We’re going back more than 20 years ago for a chilling close encounter with Catherine.

Dale Whitney, a musician who had finished playing in Bar Harbor one evening, was traveling alone to Machias.

“It was very foggy and I came up on the top of Catherine’s Hill and I was kind of straddling the line a little bit because I couldn’t see the road. And I got up to the top of the hill and all of a sudden I looked and there was a woman standing on the left side of the line.”

Whitney says he pulled over and rolled down his window, only a few feet away from the figure.

“I looked at her and I could see her complete image, everything she had on, but I could look through her which was really kind of weird.”

Whitney says his body was covered in goosebumps.

“She stepped up to the car and in a flirtatious way said, I want to go to Bar Harbor and I said I just came from there.”

In fear, Whitney sped away.

But by the time he reached the bottom of the hill, he reconsidered his actions and doubted his senses.

“She may be real. She’s probably had an accident. I turned around and drove back up on the hill and she was gone.”

Even though she was nowhere to be found, he still remembers what the figure was wearing.

“She had on a light blue what we use to call an evening gown in the old days. It hung all the way to her ankles and you could actually almost see through it.”

For skeptics, Whitney has this to say.

“If anyone told me the story, I’d say the guy’s crazy, something is wrong with him. No nothing. But it happened to me and I’m absolutely sure of what I saw.”

This next encounter is from a UMaine Machias student.

Lacie Pottle took part in the Catherine’s Hill project for a class.

They made a makeshift ouija board.

“So we kind of had this feeling that because some of our energy was put into it, it was better than a store bought one. When we sit down to use it, we made sure it was on flat ground and we put the jar on it and we all had our hand above it so you could tell if there was pressure on it.”

What happened next was most alarming. She says the jar began to move.

Pottle says she’s returned to the site more than once since the project. She says it was almost like the presence of Catherine took her over.

“It was just weird how attached we became and how she made us feel that way. And the heavy heavy weight that immediately got lifted when she came back around.”

To this day, Lacie is puzzled by the events that unfolded.

“Something happened that I can’t explain and that science can’t explain. So I walk around on eggshells as far as beliefs go these days.”

So if you dare, take a drive along the winding road of Black’s Woods.

As the legend goes, if a figure appears, you must stop and offer it a ride or pay the consequences.