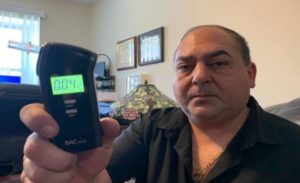 Danny Giannotto, a 47-year-old resident of Matavana (New Jersey), never knows when a breathalyzer will show the alcohol content in his body. It’s all about a very rare disease – an auto-brewery syndrome, in which the stomach turns food into alcohol.

One morning, a man ate tuna, some pickles and washed down with water. An hour later the breathalyzer showed 0.04 ppm. This value is equal to two glasses of beer, but the man did not drink alcohol at all.

He is forced to constantly use a breathalyzer. A man never knows when alcohol will be in his blood.

The American is confident that the composition of his digestive tract was changed by the antibiotics he was using.

This syndrome sometimes completely disappears on its own, but now Danny is forced to monitor the diet, excluding most of the carbohydrates.

Russian TV: A Huge Asteroid Changed The Trajectory And Now Flies To Earth