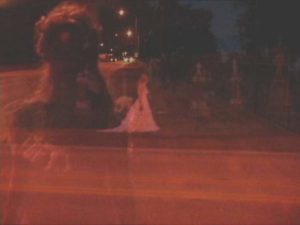 One night, sometime last summer, after a party at Willowbrook Hall in Justice, Illinois, I saw her. I saw Resurrection Mary.

Resurrection Mary is a very famous ghost in the Chicago area.

As the story goes, one night in the 1930’s, a girl named Mary was going to a party in that same building (at the time, it was called O’Brien Hall or something like that). As she was crossing the street, she was run over and killed.

She was buried in nearby resurrection cemetery. On any given night, but especially on nights when a gathering is taking place in Willowbrook hall, she’ll appear on the side of the road as a hitchhiker, VERY REALISTIC.

Then, if someone picks her up, she’ll get in the car and tell the driver to take her home. She’ll give directions, and will be talking to you as though she alive.

However, Resurrection cemetery is on the way to her home, and as soon a the driver passes it, Mary disappears.

It just so happens that I was returning from a party that night, ALONE. I drove down archer road (the road on which Mary is seen, and on which both the Hall and the cemetery re located), on my way home. I had heard stories about Mary, but at the time I didn’t believe in ghosts.

As I drove, I came across a girl hitchhiking. I was a bit nippy outside, so I gave the girl a ride. She was dressed in a 1930’s ballroom gown. he looked like a real person: her skin was a healthy pink and she didn’t look “ghostlike” (y’know, a shallow face, all the bones visible, cold, blue lips and blank stares) at all. She said he was going home and gave me directions, which I can’t remember, except that she told me I had to stay on Archer road for a long time.

I did. As we approached the cemetery, she told me to look to my left as if she spotted something unusual. I looked but saw nothing weird. I turned to ask her what she saw, but then I looked at the passenger seat, there was nobody there. I checked the back seat, but it was empty too.

Scared out of my mind, I floored it the rest of the way home.