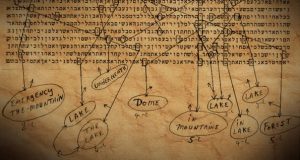 The concept of Bible Codes started in the twelfth century when Jewish students discovered fascinating and relevant hidden words in the Hebrew version of the Torah, the first 5 books of the Bible.

Devout Jews believe that details of everything that will ever happen on Earth are recorded here; the great Rabbis have always stressed that as these writings were dictated by Moses directly from God, no alterations should be made to the text.

The modern era of Bible Codes was begun by Michael Ber Weissmandl – a Slovakian rabbi who narrowly escaped the Nazi death chambers. His own interest in ancient books about Bible Codes led him to create his own theories. Although the Second World War had helped to ruin Weissmandl’s old life, it did promote the idea of code-breakers, with the famous stories of the German Enigma programme. It also marked the beginning of micro-computers, and many Torah scholars, fascinated by Weissmandl’s ideas, were able to harness complex technology to further the research into Bible Codes.

In 1994 a team of intellectuals, Doron Witztum, Eliyahu Rips and Yoav Rosenberg, released a study in the Statistical Science publication of an experiment they had conducted using methods developed by Weissmandl. They said they had found references to 34 Great Rabbi Sages, together with their respective birth and death dates, hidden in the book of Genesis. This study ignited the scientific and popular interest in Bible Codes, which is still active today, and has led to many more books being produced, although not all of these have had such groundings in scientific procedures.

So how are the information in the Bible decoded? In its simplest form, the research uses a system called Equidistant Letter Sequencing. This works by inserting all the letters in the text next to each other, with no spaces or punctuation. Then, by performing uniform jumps along the letter chain, other words are discernible. For example:

In the above passage, by skipping to every 3rd letter from the starting point, we get the word ‘NAZI’. The technique can be used forwards or backwards, with any number of letter jumping or spacing. There are even more complicated ways of decoding, called arrays or matrices; they are a two dimensional presentation of the text – rather like a word search puzzle – which contain hidden words in different directions.

Weissmandl’s initial discovery was that by using the first T in the first verse of the book of Genesis, and then skipping 50 letters three times you end up with the word TVRH, the Hebrew spelling of Torah. This finding applies with the same 50 letter skips in the first verses in the book of Exodus and Numbers. Most recent research has shown references to Hitler, Mein Kampf, and other historical events. Nevertheless, sensationalist authors have rather corrupted the system to produce fanciful assertions, and the Bible Code has become a phenomenon rather akin to the prophecies of Nostradamus.

Afterwards some experts have attempted to use it as a method of foretelling the future. Many Code enthusiasts trust it is not supposed to be seen as a way of deducing our fate, but should be seen as proof that the Torah was actually written by God, who had knowledge of all that would come to pass. They say that searching the text for references to future events that might occur is not valid, because if they fail to happen, then they would just be random word formations. Many people believe the valid details that do seem to appear in the Bible Code are merely random words which just happen to correspond to a real event.

Definitely, there is a huge body of sceptical statistical and computer experts in the scientific world. Two such intellectuals, mathematicians Dror Bar-Natan and Brendan McKay, were the first to refute the findings of Witztum, Rips and Rosenberg. McKay and Bar-Natan found similar results when looking for the details of famous Rabbis within the text of Tolstoy’s War and Peace. Other experiments have also revealed a foretelling of famous assassinations, Princess Diana’s death and the ‘War on Terrorism’ all hidden in the text of Melville’s Moby Dick.

The Bible Code breakers say they are pursuing this subject to prove God really did write the Bible although one is tempted to think that an overly elaborate code system will have little effect on the faith of either a believer or an atheist.