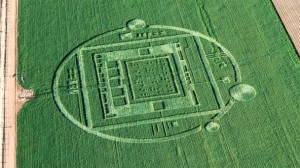 The phenomenon of the crop circles is one that we consider as being a relatively recent mystery, but strange patterns have actually been appearing in fields for over 300 years. Often occurring in sand, ice or even snow, five thousand of these beautiful geometric shapes have shown up themselves in over forty countries around the globe. Nevertheless, Man is still no closer to realising their significance. Some are undoubtedly hoaxes but what do the others mean? Are they messages from space, Mother Earth, or perhaps another dimension?

Over the years, people who live in the countryside, particularly those who live along ley lines and channels of natural energy, have come to regard the circles as part of rural life and a few witnesses have actually seen them made. They say an invisible line snakes its way at large speed through a field, moving the stalks of crops aside. When it reaches a certain point it begins to spin round, pushing the crop down radially, as would the hands on a clock. When it has turned the full 360 degrees the force just disappear, leaving the crop perfectly matted on the field floor. No stalks spring up, and no stalks are crushed, they are all carefully and permanently bowed.

The question as to who or what actually determines that the patterns should be made is still up for debate. Tales of UFOs and strange lights above fields the night before new formations appear are common. Likewise, there are a substantial proportion of hoax circles, but these are often easily discernible as they have trampled, crushed crops rather than gently bent stalks. A lot of people are convinced freak weather conditions such as mini, localised whirlwinds cause the patterns. There is also a ongoing study into the scientific qualities of crop circles, where researchers hope a rational, serious approach will reveal the truth. 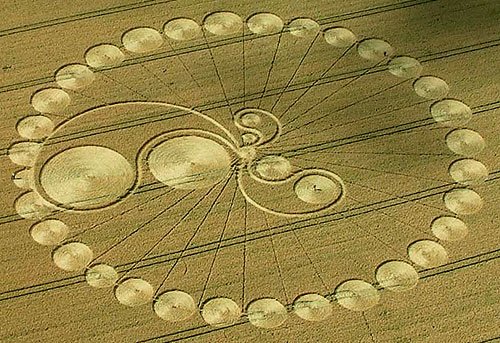 Probably the most popular explanation for the appearance of crop circles is connected with earth forces. The great majority of good, reputable patterns in England appear in Wiltshire, around historic areas of high natural energy. They also often occur close to historical forts, burial mounds, standing stones and fertility symbols therefore suggesting an affiliation with Britain’s traditional heritage. Indeed, numerous people are convinced the ancient forces of Mother Earth have a hand in their creation.

One aspect of crop circles’ character that is not questionable is the effect they have on electronic equipment. Tape recorders are known to speed up once inside a circle and then slow down again outside. State of the art video equipment malfunctions without good cause, and even ordinary photographic cameras have produced severely distorted images. A rather ironic reaction circles have is on farm machinery. Not only are good crops flattened during a circle’s production, but many farmers have witnessed their harvesting equipment refusing to work anywhere near the circles.

The circles have striking effects on humans. Some experts suggest that stepping inside certain patterns can cause extreme emotion change. Certain people feel an increased physical well-being and vitality in certain circles, whilst in others feelings of sickness, migraine, fatigue and lightheadedness can be brought about.

Just by resting inside stone circles people with a long standing medical conditions are said to have been significantly improved or even cured; the effect of a crop circle’s power on animals is equally impressive. Horses and cats in particular become agitated near patterns, and often refuse to enter them. Flocks of birds have been seen flying straight towards a crop formation, only to drastically steer around them at the last minute, whilst some dogs feel compelled to bound right into the centre of some circles, only to drop down asleep when they reach it.

It seems a embarrassment that some people do create hoax crop circles. Of all unexplained phenomena, they are one of the most deserving of scientific study. As opposed to the fleeting images of monsters, aliens and ghosts, crop circles are their own record of some unknown power. No matter what causes these formations undoubtedly leaves a trace of its inexplicable force. Country folk are well aware that, for centuries, something with which they have grown to live has been going on in their fields, but it is still something they do not quite understand.