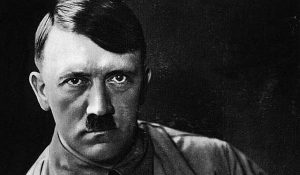 Newly published letters written by Nobel prize winner Heinrich Böll showed up to confirm that Nazi soldiers took crystal methamphetamines in order to stay awake and motivated, despite the desperate conditions they faced on the front line.

Now, new research has revealed that Adolf Hitler was himself a regular user of the drug, now a Class A, prized among addicts for its feeling of euphoria but feared for its mental destructiveness.

In accordance to a 47-page wartime dossier compiled by American Military Intelligence, the Fuhrer was a famous hypochondriac and took over 74 different medications, including methamphetamines.

It claims that Hitler took the drug before his final meeting with Italian fascist leader Mussolini in July of 1943, during which he apparently ranted non-stop for two hours.

Adolf Hitler eased the pain of his final days in his bunker with 9 injections of a drug called Vitamultin, too, which included among its ingredients meth-amphetamine.

The dossier – which is the subject of a new Channel 4 documentary Hitler’s Hidden Drug Habit – goes on to claim that the Fuhrer became addicted to drugs immediately after seeking the medical advice of Berlin-based Dr Morell in 1936.